Merapi is located about 28 km north of Yogyakarta city, which has a population of 2.4 million. 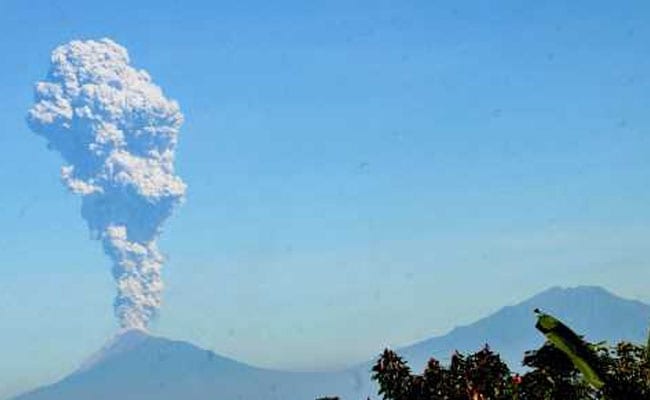 Out of Indonesia's 129 active volcanoes, Merapi is the most active one. (File)

Jakarta, Indonesia: Mount Merapi, Indonesia's most active volcano, erupted on Friday and spewed a column of ash 6 km into the air.

Situated at the borders of Yogyakarta and Central Java provinces, the volcano erupted at 8.20 a.m. with ash spreading to the west of the crater, spokesman of national disaster management agency Sutopo Purwo Nugroho said.

Merapi is located about 28 km north of Yogyakarta city, which has a population of 2.4 million and thousands of people live on the flanks of the volcano.

"A red VONA (Volcano Observatory Notice for Aviation) alert has been issued with immediate effect," he told Xinhua news agency, referring to the highest level of the notice, meaning planes are not allowed to pass through the volcano area.

The alert status of the volcano has been scaled up to the third highest with no-go zone in the radius of 3 km from the crater, according to the agency.

Still, its level could change in line with the development of the latest situation, Sutopo added. On May 24, Mount Merapi erupted releasing poisonous gases into the air, according to the volcanology agency.

One of Indonesia's 129 active volcanoes, Merapi has regularly erupted since 1948. In November 1994, pyroclastic flow from a large eruption killed 27 people, and another major eruption occurred in 2006.
Comments
Mount Merapi VolcanoIndonesiaYogyakarta