"Run to the Hills": Tsunami Fears Cause Chaos In Indonesia Town

People clambered onto the back of trucks and motorbikes or ran through the traffic in a bid to reach the safety of higher ground. 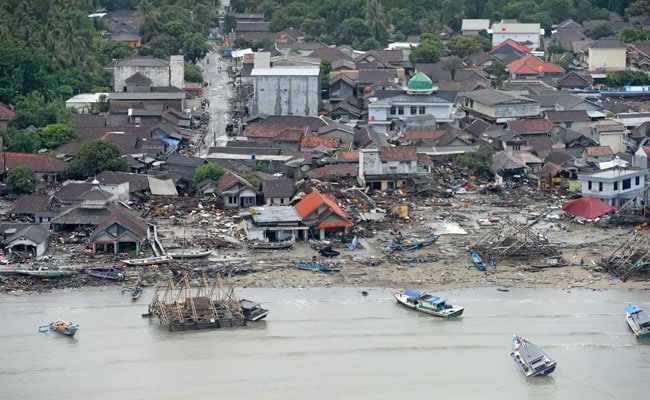 Hundreds of panicked residents, many sobbing and clutching small children, tried to flee Sumber Jaya village today as word spread that another tsunami was about to smash into the shattered Indonesian community.

At a busy intersection several hundred meters back from the beach, people clambered onto the back of trucks and motorbikes or ran through the traffic in a bid to reach the safety of higher ground, as the water level rose in the sea.

Police and search-and-rescue workers tried to help get people out, but the local mosque soon calmed the chaos over its loudspeaker: the rising waterline was just a regular tidal surge, not a repeat of Saturday's killer tsunami.

The desperate exodus underlines the level of fear along Indonesia's gutted coastline after the volcano-triggered tsunami struck without warning, killing over 400 people.

It swept over popular beaches on southern Sumatra and the western edge of Java, inundating tourist hotels and coastal towns, including Sumber Jaya, leaving a trail of death and destruction in its wake.

Abdul Aziz, a disaster aid volunteer who was working in Sumber Jaya when Tuesday's chaos erupted, said gossip about another tsunami triggered the rush of people out of town.

"There was information that the water was rising, but it was only a rumour," he told AFP.

It wasn't the first time since Saturday's disaster that whispers about fresh waves sowed panic among nervous area residents.

Officials say an eruption of the rumbling Anak Krakatoa volcano, which sits in the strait between Java and Sumatra, caused a section of the crater to collapse and slide into the ocean, triggering the tsunami.

With volcanic activity still high, experts have warned that more killer waves could slam the stricken region -- and thousands of evacuees are still too afraid to return home.

"I've been here three days," said Neng Sumarni, 40, who was sleeping with her three children and husband on the floor of a school with some three dozen others in hard-hit Carita.

"I'm scared because my home is right near the beach."

(Except for the headline, this story has not been edited by NDTV staff and is published from a syndicated feed.)
Comments
indonesia tsunami 2018TsunamiKrakatoa volcano