Thousands died at the schools, and many were subjected to physical and sexual abuse, according to an investigative commission that concluded the Canadian government engaged in "cultural genocide." 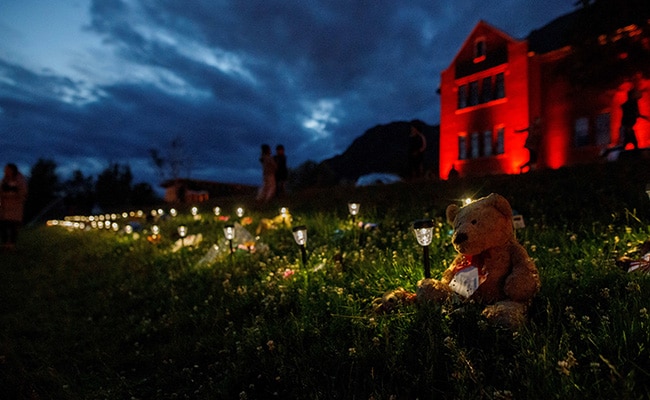 The discovery of the unmarked graves was a "major shock" to Canadian society, says University of Montreal

As they learn more about their country's painful history of residential schools for indigenous children, many shocked Canadians are calling for further efforts to expose the truth as a way to move toward reconciliation.

"It's definitely a turning point," said Ghislain Picard, regional chief of the Assembly of First Nations of Quebec-Labrador.

"People are more responsive now," he said. "They want to know the truth" about this dark chapter of Canada's history.

The details of the forced assimilation and violence that was perpetrated at these institutions had reached a slightly larger audience of non-indigenous Canadians in the last several years, partly thanks to a 2015 report.

But widespread outrage has erupted in recent months after the discovery of hundreds of unmarked graves on the grounds of several such schools.

Tens of thousands of First Nations, Inuit and Metis children were forcibly enrolled in these Catholic schools all over the country from late in the 19th century until the 1990s, separated from their families and their cultures.

Thousands died at the schools, and many were subjected to physical and sexual abuse, according to an investigative commission that concluded the Canadian government engaged in "cultural genocide."

In 2008, Prime Minister Stephen Harper issued an apology on behalf of the Canadian people for indigenous boarding schools.

"It was predictable that one day we would discover something like this," said 33-year-old Montreal resident Marie Christine Boivin-Fournier, who said she was shocked at the findings.

But she has decided to turn that shock into action. Instead of gifts for her birthday earlier this month, Boivin-Fournier asked friends and family to donate to a fundraiser after learning more about "the residential schools, the colonial genocide and the disappearance of indigenous women and girls."

It was a "simple gesture," but meant a lot, said the Native Women's Shelter of Montreal, which the fundraiser benefitted.

"Actions are more important than words," said Nakuset, the shelter's director, who goes by just one name, calling such actions "reconciliaction." This is a play on words with reconciliation.

The organization received a lot of donations this year for Canada's July 1 national day, she said.

While some Canadians have chosen to respond to the new information by supporting the indigenous community through monetary donations, others have turned their anger toward the Catholic Church.

Kim Verreault has even decided to leave the church entirely, beginning the formal process of apostasy to officially abandon the religion.

"I don't see the point of remaining in the Catholic religion," 49-year-old Verreault said, saying that the recent grave discoveries sealed her decision. "It's a gesture of commitment and also a message I want to send."

"Their territory was stolen, their children, their culture, their religion, their names and their lives. It was all taken. It's unacceptable," said Verreault, a Granby resident who was born into a Catholic family.

The discovery of the unmarked graves was a "major shock" to Canadian society, according to University of Montreal anthropology professor Marie-Pierre Bousquet.

"People realized (the legacy of residential schools) wasn't just black-and-white photos of classes of kids around the country. It became tangible, concrete," she said.

"This is not the image that Canadians have had of their country. This is not a country where children are buried in secret," Bousquet explained.

"They see (their country) as a great multicultural democracy, with a bright past, wide open spaces -- not a country built on genocide. We have finally realized that that is a myth. It's a very brutal revelation."

At universities, that realization has meant a sharp growth in the enrollment in native studies programs.

Enrollment in the Native Studies Department at the University of Alberta reached 40,000 as of the week of July 5, department professor Paul Gareau, who is Metis and originally from Saskatchewan, said.

Usually about 1,000 people per month take the course, he said.

"This 40,000 is indicative of people responding to something and I can only think it's the residential school discoveries," he said, amazed at the number.

And Bosquet said she thinks more Canadians will want to "be informed" about the country's indigenous past as research on residential schools continues.

Experts estimate that some 150,000 children attended the residential schools and that more than 4,000 of them may have died at the institutions.

Climate Activists Deflate Tyres Of Over 900 Cars In 8 Countries. Here's Why