The bridge in Akoka village in the northern part of the land-locked country in East-Central Africa had been inoperable since last June when heavy rains washed away a 300-metre-long road segment. 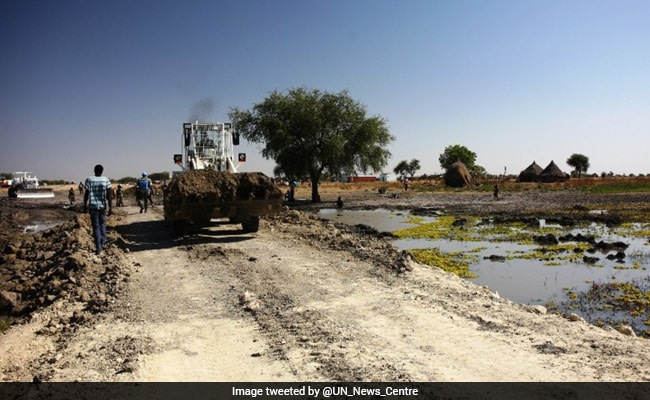 United Nations: People in a South Sudan village have been saved a perilous neck-deep wade across a river to reach a town and access basic services, thanks to Indian peacekeepers from the UN mission who have re-built a key bridge in record time in the strife-torn country.

The bridge in Akoka village in the northern part of the land-locked country in East-Central Africa had been inoperable since last June when heavy rains washed away a 300-metre-long road segment.

Rebuilt in record 10 days by the UN Mission in South Sudan (UNMISS) in collaboration with the government, it has greatly benefited humanitarians, enabling faster aid delivery as well as security patrol and outreach activities by the Mission, according to a UN statement.

"The project was vital to allow other critical road repairs in the region," Lt Colonel Nishkam Puri, in-charge of the Indian engineering company that rebuilt the bridge, was quoted as saying.

"The major challenge was reconstructing the bridge through a submerged area with a depth of up to 4 metres in some places," he said.

The Akoka Bridge lies between provincial capital Malakal and oil-rich Melut town on a major service road that also reaches Bunj and Renk, both in the country's northeastern part.

"The road now provides access for life-saving food and supplies to reach the people who need them," Ratomir Petrovic, a spokesperson for UNMISS, said.

"Providing for the basic needs of the most vulnerable is essential to empowering them. Initiatives such as this one demonstrate the power of peacekeepers to make a real difference in the lives of South Sudanese families," he added.

According to the Mission, the next phase is installing appropriate structures and marram to bolster the bridge's strength to withstand the next rainy season.

Promoted
Listen to the latest songs, only on JioSaavn.com
India, which has its 700 nationals living in South Sudan, has two battalions of about 2,000 personnel in the UNMISS, deployed in two of the largest states the country - Jonglei and Upper Nile, according to information on Ministry of External Affairs website.