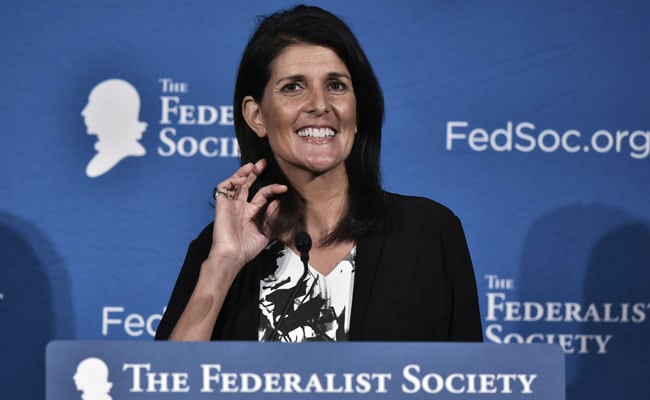 South Carolina Gov. Nikki Haley, a rising Republican star and daughter of Indian immigrants, has accepted President-elect Donald Trump's offer to serve as U.S. ambassador to the United Nations in the coming administration, according to a person familiar with the selection process.

The move, which will be announced Wednesday morning, was first reported by the Charleston, S.C., Post and Courier, comes as Trump advisers are seeking to diversify his ranks and marks his first female appointment to a cabinet-level post.

The person spoke on the condition of anonymity to discuss a decision that has not yet been announced by Trump's transition team.

Haley, 44, who is serving her second term, has worked on trade and labor issues as governor but brings little foreign policy experience. Her views on various U.S. military and national security matters usually fall within the GOP's hawkish mainstream.

Trump met with Haley last Thursday at Trump Tower in New York as part of the round of meetings the president-elect has held.

If confirmed, Haley would be replaced by South Carolina's Lt. Gov. Henry McMaster, a top Trump ally. His ascension is seen inside of Trump's inner circle as a welcome consequence of her departure, the person said - a way to promote them both.

The Post and Courier noted that Haley has taken at least eight trips abroad since taking office in 2011, including visits to Germany.

Haley also represents the addition of a rival. She was critical of some of Trump's proposals, such as his temporary ban on Muslims' entry to the U.S., during the Republican primary contest and backed Sen. Marco Rubio, R-Fla., in its early months.

When she gave the GOP response to President Obama's State of the Union address last year, Haley criticized the "angriest voices" within national politics and their "siren call" to voters, a line widely seen as a not-so-subtle shot at Trump's campaign.

But when she visited Trump last week, Haley told reporters that she never disliked Trump in spite of her past comments.

"He was a friend and supporter before he ran for president, and was kind to me then. But when I see something I am uncomfortable with, I say it," she said. "When we met, it was friends who had known each other before."