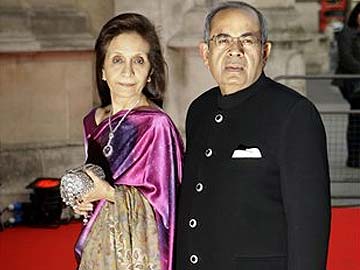 FILE - In this Thursday, April 15, 2010 file photo, Gopichand Hinduja and guest arrive for the private viewing of the exhibition 'Grace Kelly: Style Icon', at the Victoria & Albert Museum in London.

London: India-born Hinduja brothers, Srichand and Gopichand Hinduja, have emerged as the richest men in Britain with a net wealth of 11.9 billion pounds (about $20 billion), according to a report.

The owners of the global conglomerate Hinduja Group saw their fortune rise by 1.3 billion pounds during last year, the Daily Mail reported citing the 2014 Sunday Times Rich List that will be published May 18.

Lakshmi Mittal, an Indian steel tycoon owning ArcelorMittal, ranked third in the list with a fortune of 10.25 billion pounds.

The study revealed a total of 104 billionaires based in Britain with a combined wealth of more than 301 billion pounds.

That number has more than tripled in a decade, according to the list.

The richest Briton on the list is the Duke of Westminster whose fortune rose to 8.5 billion pounds.

Promoted
Listen to the latest songs, only on JioSaavn.com
Of the 104 billionaires, London is home to 72 of them -- the highest in any city in the world.

The list also pointed out that Britain has more billionaires per head of population than any other country in the world.