In the Philippines, the next Phuket? 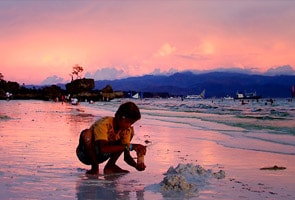 Manila: Don't try to hoof it to the newly relocated Jungle Bar, at least not from Boracay's main strip, White Beach, where it used to be a mainstay -- you'll never find it. Instead, hail a motorized rickshaw to Bulabog Beach, hang a right past a barren strip of bamboo shacks, and look for the colorful, ghoulish lanterns dangling from the coconut trees, which give this tiki bar the quirky feel of a Tim Burton-inspired guerrilla camp. The décor will probably be familiar to most Bob Marley-listening beach bums, right down to the rooster named Pedro dozing on the bar, the shirtless Filipinos eating grilled fish, and the $10 cocktails with profanity-laced names. All that's missing is a drum circle.

Yet this kind of anything-goes vibe is getting harder to find in Boracay, a speck of an island smack in the middle of the Philippines that in recent years has been making the leap from low-key tropical backwater to Southeast Asia's newest hot spot. Even the Jungle Bar, which used to be squeezed in along the main walkway of White Beach, had to move this year after being priced out. It's now in a desolate cove on the other side of the island -- as close to Siberia as you can get on a slip of land about five miles long and a mile wide.

The Philippines' tourism ministry has pushed to promote and develop many of its prized islands and to draw more visitors than the usual weekenders from Manila or honeymooners from Korea. Boracay, with its long stretches of powdery white sand and kite-surfing- and-dive-friendly coral reefs, remains the crown jewel, if not yet the cash cow, of the Philippine Islands.

"They're going crazy on Boracay because they want it to become the next Thailand," said Margaux Palau, 34, a local diving and yoga instructor originally from Spain, referring to Thailand's touristy shores. "Boracay is much nicer, if you ask me, but it's also much farther for most people, which is why it's still unknown."

But that is changing. In the first quarter of this year, the country's prime tourism season, the number of foreign visitors to the Philippines was up by 8 percent from the same period a year ago; Boracay, which is less than an hour's flight from Manila, had a 20 percent spike in tourism. Last year, this island's 650,000 tourists -- a third of them foreign -- marked an all-time high, according to the department of tourism.

Most of the island's attractions can be found along White Beach, its three miles of soft sand lined with thick groves of swaying palms. For better or worse, this part of Boracay has embraced its inner Phuket, with barking masseuses, all-you-can-eat buffets and resorts with more waterfalls than the Amazon.

The rising population and frenzied pace of development have put stress on this fragile island. To ease roadway congestion, a new byway is under construction, and plans are in place to clean up the sewage-tainted waters farther offshore. Meanwhile, a number of new Gatsby-esque villas and vacation homes are laying claim to the island's limestone cliffs and virgin coastline.

Expansion of the closest airport, in Caticlan, a short ferry hop from the island, is also planned.

Bare-bones cabanas catering to backpackers are giving way to fancy resorts with all the perks. The tree-house-like cottages of Nami, an exclusive resort, were eclipsed last year by a new development, Shangri-La, which has its own private lagoon. The tiki-style bungalows of another resort, Fridays, were recently one-upped by Discovery Shores, whose "beach butlers," down pillows and sunken pool bar have added a contemporary touch to Boracay.

While the dress code still skews beach style -- de rigueur flip-flops, loose Hawaiian shirts -- at least one woman in stiletto heels was trying her best to navigate the sandy boardwalk. The influx of visitors has even prompted a "Bor-a-CAY please, not Bora" campaign among natives, a gentle jab at those who truncate the island's name.

But the island's emerald-blue waters have a way of keeping almost everyone happy. After all, you can kite-surf in the morning, dive through underwater caves and shipwrecks in the afternoon, and still have time for island hopping by sundown -- just flag down any of the pawans, or outrigger sailboats, along White Beach. If a water sport exists, chances are you can find it on Boracay, and someone will likely shove a flier in your face to try it out for a "low price" ("Sir! Dragon-boat racing?").

On land, there's also plenty to do. Behind D'Mall, a touristy maze of T-shirt stands in the middle of the island, look for Leonardo's pond-side motorbike-rental shack. Take a spin up north to Puka Beach, a gorgeous, secluded cove whose prickly sand is actually a bed of snail shells. Or make the heart-stopping descent into a nearby limestone cave, armed only with a flashlight and a young guide, to inspect the squeaking fruit bats and squirming snakes (wear shoes, not flip-flops, as the descent is slippery).

The less-bustling side of the island near Bulabog Beach is also well worth a visit, with its Swedish-owned surf shops and squat bamboo huts that double as guesthouses. The brackish waters are not really for swimming, but the steady winds and shallow coves make it one of the world's premier spots for kite- and wind-surfing.

Cap off a day on the water with an early cocktail. Happy hour, with its seaside pig roasts, fire-eating shows and karaoke sing-alongs up and down White Beach, is as celebrated a ritual here as Sunday Mass. As crowds filtered through the beachside cafes, an '80s cover band belted out tunes onstage while the D.J.'s at Hey Jude Bar began setting up their turntables.

"The Boracay night life is easily the best in the Philippines," said D.J. Surf, a 25-year-old half-Filipino, half-Briton with swirly tattoos across his torso. "But I've seen photos from way back when there was nothing here -- just an empty beach, a forest of coconut trees, some happy locals and a bunch of hippies who to this date are still here."

One of those hippies is Joey Gelito, a Filipino better known as Captain Joey and a Boracay resident since 1989. With his long mane of jet-black hair, strong cheekbones and seashell necklace, the captain, 44, looks the part of a pirate, which he plays up to full effect at his Red Pirates Bar, a mellow hut of thatched bamboo and nautical paraphernalia.

He also gives island tours on his fire-engine-red sailboat, which come with coolers of San Miguel beer and end at beachside barbecues.

Captain Joey says he welcomes the boom in business, but not the construction and development everywhere.

"I just stay on the beach to avoid the noise," he said in a raspy voice. "I prefer the quiet, to preserve the best of Boracay."

Promoted
Listen to the latest songs, only on JioSaavn.com
As the Euro-style clubs and karaoke palaces filled up with hard-partying Koreans and Europeans, D.J. Surf offered his take on the island's newfound fame among real estate developers and the Manila elite.

"I don't feel we're overdeveloped," he said. "I know some people do, but in my line of work as a D.J. here, more development means more jobs for people. If there's more people on the island, the more the merrier it is to make them all dance."