In Thailand, Volunteer Takes To Skies To Drop Supplies To Flood Victims

Vichai Tiyasan has been motoring over waterlogged lands to drop off dry food and essential items in Sukhothai, one of 30 provinces impacted by floods 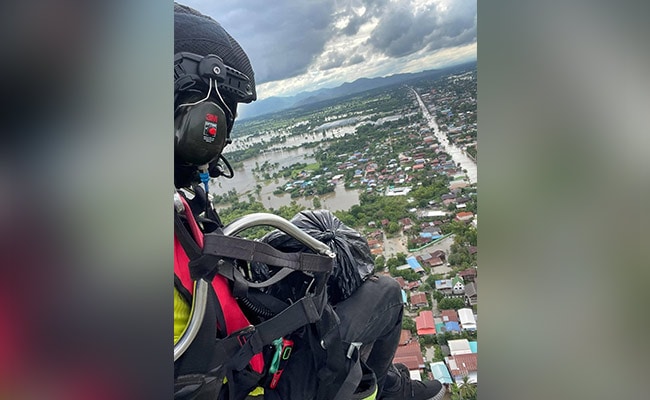 Footage of Vichai Tiyasan's endeavours have been shared widely on social media. Reuters

A paramotoring enthusiast in northern Thailand has taken to the skies to help deliver urgently needed supplies to people cut off by floods.

Thrill-seeker Vichai Tiyasan, 38, has been motoring over waterlogged lands to drop off dry food and essential items in Sukhothai, one of 30 provinces impacted by floods in the past week

Footage of his ultralight aviation endeavours have been shared widely on social media.

"The flood covers most areas of Sukhothai province. The situation is worse compared to the past years," Vichai told Reuters by phone.

A paramotor, also known as a powered paraglider, comprises a back-mounted metal frame with a propeller driven by a petrol-fuelled motor resembling a giant household fan.

The pilot can steer it using brake toggles that are similar to that of a parachutist.

At least six people died and two were missing in the floods, according to the disaster agency, which has also issued flood warnings in areas along the Chaophraya river, including the capital Bangkok. Thailand is no stranger to flooding and in 2011 was hit by its worst floods in half a century, in a crisis that lasted months and saw hundreds of people killed, heavy industry devastated and many parts of the capital paralysed.