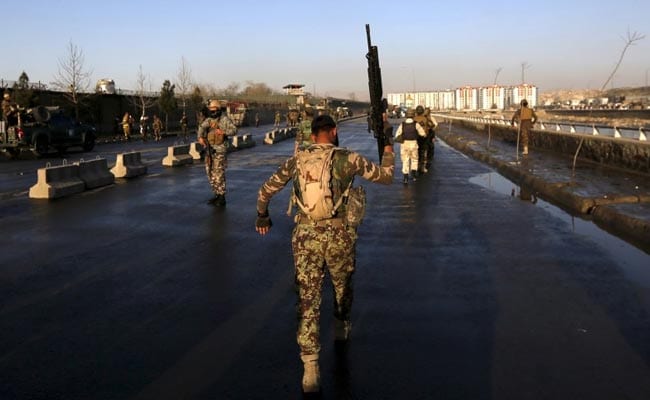 File photo: A member of Afghan security forces holding up his rifle as he walks at the site of an attack in Kabul, Afghanistan February 27, 2016. (Reuters Photo)

Islamabad/Peshawar, Pakistan: Pakistani officials threatened to expel Afghanistan's Taliban from bases in Pakistan if they did not join peace talks this month, but the militants rebuffed their traditional patron, two officials said, casting doubt on how much influence Islamabad retains over them.

After the secret meetings with Pakistani officials about two weeks ago, the Taliban's Supreme Council met at an undisclosed location and voted to reject the talks scheduled for early March with the Afghan government, according to a council member.

Instead, the insurgents are now pouring back into Afghanistan for what they say will be a fierce spring offensive to be launched soon.

Pakistan's influence over the insurgents is the lynchpin to the peace plan developed over last few months by Afghanistan, Pakistan, the United States and China to bring an end to the 15-year-old war in Afghanistan.

A Pakistani official in Islamabad said the Taliban's recent success on the battlefield inside Afghanistan had changed the equation.

"They no longer need their Pakistan bases in the same way, so if Pakistan threatens to expel them, it does not have the same effect," said the official, a retired military officer close to the talks.

The insurgents have won new zones of influence - if not outright control - from Afghan security forces since the United States and its allies pulled most combat troops from Afghanistan at the end of 2014, Afghan and Western officials acknowledge.

"Pakistan's trump card - safe havens on its soil - is in danger of being snatched away," said Michael Kugelman of the Woodrow Wilson Institute, a Washington-based think tank.

"The Taliban have little incentive to step off the battlefield now, given recent gains and those likely to come in the next few months. In effect, why quit while you're ahead?"

Nafees Zakaria, a spokesman for Pakistan's Foreign Office, said he had no knowledge of meetings with the Taliban but added, "We usually don't know who has met with whom" in the sensitive and high-level peace initiative.

In Kabul, however, members of the Afghan government were sceptical about Pakistan's assertions.

"Pakistan's honesty and sincerity with regard to the Afghan peace process has always been a question," said an Afghan cabinet member, echoing the sentiment of several officials interviewed there.

Pakistan's military has long been accused of fostering the Taliban as a way of pursuing regional rivalry with India.

Pakistani officials, however, deny the charge and insist the government and military recognise that Afghanistan's war threatens their own security .

A member of the Taliban's leadership council, or shura, whose members are mostly based in Pakistan and Afghanistan but also travel between Qatar and the United Arab Emirates, said rebel representatives met in Islamabad with Pakistani officials a little more than two weeks ago.

"They have asked our representatives to bring more decision-making people to the next meeting ... to the meeting with U.S. and Afghan officials. This is their dream, but they will not be able to see our senior commanders," the Taliban council member said.

A senior Pakistani security official with knowledge of the talks said: "I don't think the talks are dead, but they are definitely plagued by a serious illness.

"The ones who are in Pakistan ... We have told them repeatedly that they will have to leave if they don't participate in the process," the Pakistani official said..

"We have done what we can ... but influence does not mean control. Those days are long gone."

The Taliban source had knowledge of, but did not attend, the meeting with Pakistani officials in Islamabad. He was at the subsequent Taliban council meeting to decide on whether to join the peace talks.

The pro-talks camp largely comprised supporters of nominal Taliban leader Mullah Akhtar Mansour, believed to be hiding in Pakistan after being shot in a leadership dispute last year and rumoured killed, and his chief rival, Mullah Mohammad Rasoul, who is believed to be in Afghanistan.

"I personally feel that Mullah Mansour and some other leaders are in favour of peace talks and they don't want to annoy Pakistan ... but they can't make decisions without approval of other shura members," said the Taliban council member."

Taliban spokesman Zabihullah Mujahid declined to comment on any meetings with Pakistani representatives. He confirmed the Leadership Council meeting but would not give details.

Publicly, both the Afghan and Pakistani government are expressing hopes that peace talks can begin before the traditional Taliban spring offensive .

However, Taliban commanders told Reuters that with the council's decision, they are focusing on launching their annual fighting season with the hopes of grabbing more territory.

"We already have started focusing on the spring offensive, and that's why the majority of the fighters and commanders are going there (Afghanistan)," said a senior Taliban figure, based in the Pakistani province of Baluchistan.
© Thomson Reuters 2016