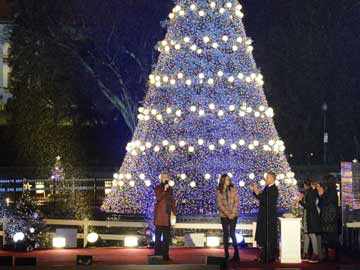 U.S. President Barack Obama (3rd L) applauds with the First Family as host Jane Lynch (L) speaks after Obama threw the switch at the conclusion of the National Christmas Tree Lighting ceremony on the Ellipse in Washington

Washington: Braving rain and cold, President Barack Obama and his family ventured across the street from the White House on Friday to preside over the lighting of the U.S. national Christmas tree.

Obama, his wife, daughters, and mother-in-law took part in the annual tradition, which featured music by singers Mariah Carey, Aretha Franklin, and the group Train.

"You are lucky I'm not singing," Obama joked to the rain-soaked crowd.

The president used the occasion to pay tribute again to Nelson Mandela, the former South African president who died on Thursday.

"This year, we give a special measure of gratitude for Nelson Mandela, a man who championed ... generosity of spirit," Obama said to applause. "In his life, he blessed us with tremendous grace and unbelievable courage. And we are all privileged to live in a world touched by his goodness."

Promoted
Listen to the latest songs, only on JioSaavn.com
At the beginning of the ceremony, Obama initiated a countdown that concluded with the lighting of the large tree - but he started from five rather than 10 to speed up the proceedings in the cold.