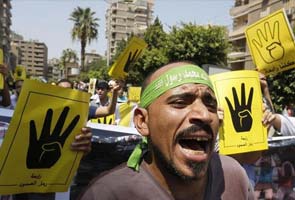 Cairo: Thousands of supporters of ousted Islamist president Mohamed Morsi marched through Cairo and cities across Egypt on Friday to demand his reinstatement, the movement's biggest show of defiance since hundreds of protesters were killed two weeks ago.

Violence appeared to be limited, by the standards of the army crackdown on Morsi's Muslim Brotherhood, as the marchers defied warnings that the security forces massed at key intersections would open fire if protests turned violent.

The Health Ministry said three people had been killed and 36 wounded in various incidents. A ministry official in Port Said, on the Suez Canal, said one protester had been killed and 21 injured there in clashes between Morsi supporters and opponents.

The army-backed government has arrested most of the leaders of the Brotherhood since Morsi was toppled by the military on July 3, suffocating protests and all but silencing the movement that ruled Egypt for a year.

Friday's demonstrators appeared to have chosen to hold numerous scattered protests and to avoid Cairo's bigger squares, where police and tanks were deployed in force, or the scenes of earlier protests such as the pro- Morsi street camps where security forces shot dead more than 600 people on August 14.

Just after Friday prayers, around 500 protesters set off from central Cairo's Sahib Rumi mosque chanting, "Wake up, don't be afraid, the army must leave!", "The Interior Ministry are thugs!" and "Egypt is Islamic, not secular!"

By mid-afternoon, thousands were marching in several Cairo districts and suburbs calling for the return of the elected government.

Soldiers were joined by helmeted police in black uniforms and bulletproof vests, armed with tear gas guns and semi-automatic rifles, at checkpoints near the protests. They blocked access to one of the bridges over the Nile.

Marches were also held in several cities in the Nile Delta including Tanta and Fayoum, the three Suez Canal cities of Suez, Ismailia and Port Said, and in the southern city of Assiut.

State television showed little or no footage of the marches, but the Muslim Brotherhood's London press office circulated an email with links to video streams from what it said were protests on Friday in 15 districts of Cairo, as well as 32 more in other towns and cities across Egypt.

Armed forces chief General Abdel Fattah al-Sisi and the military-backed government appear to have won broad public support for their crackdown on the Brotherhood, which they portray in the largely state-controlled or pro-government media as a fight against terrorism.

The Brotherhood, which won five popular votes after the overthrow of the military-backed president Hosni Mubarak in 2011, and gave Egypt its first civilian president in Morsi, says it is still committed to peaceful resistance.

For decades Egypt's only effective opposition group, despite being officially banned, the Brotherhood capitalised on the anti-Mubarak uprising to win the presidency and push through a new, Islamist-tinged constitution.

But millions were alienated by its ideologically-driven rule and its failure to revive the economy, and took to the streets to oppose it, giving the army-backed establishment its cue to act against a group it had repressed for decades.

On Thursday, security forces caught Mohamed Beltagi, one of the few main Brotherhood leaders still at large, who had urged Egyptians to join Friday's rallies in a recorded statement aired this week by the Qatari-owned Al Jazeera television network.

The same day, the Interior Ministry issued a statement warning protesters that police would be armed with live bullets and ready to confront any attempts to undermine security or "assault government, police or religious facilities".

On Friday the cabinet urged protesters in a statement to remain peaceful and respect the state of emergency.

From early morning, security forces made their presence felt, as armoured vehicles fitted with machine guns guarded central squares and intersections including Tahrir Square, epicentre of the 2011 uprising, and Ramses Square, where more than 100 people, mostly Morsi supporters, were killed in protests exactly two weeks ago.

In addition to many police vans, all emblazoned with the slogan "Police of the people", armed men in plainclothes provided a threatening security presence around some marches.

Many of Friday's protesters wore T-shirts or carried placards bearing a hand giving the four-fingered salute of the protest movement, and chanted its slogan, "We are all Rabaa" - a reference to the main protest vigil outside the Rabaa al-Adawiya mosque where hundreds were killed on August 14.

In the city of Fayoum, the private television channel CBC showed footage of a female Brotherhood supporter in a black head-to-toe veil, leading a march of veiled women and carrying a placard reading "Where did legitimacy go?".

The Egyptian-born Muslim cleric Sheikh Youssef al-Qaradawi exhorted Egyptians from Qatar to take to the streets.

Promoted
Listen to the latest songs, only on JioSaavn.com
"You Egyptians, go out, all of you, men, mothers, daughters even children. This is a religious duty on all Egyptians!" he said in a Friday sermon broadcast on Qatari state television.

The crackdown on Islamists has already soured relations between Egypt and Qatar, a wealthy Gulf Arab state and US ally that had backed the Brotherhood and given Egypt $7 billion during  Morsi's administration.
© Thomson Reuters 2013