Although some homeless people chose to stay in their downtown encampments, the city said their efforts were largely successful. 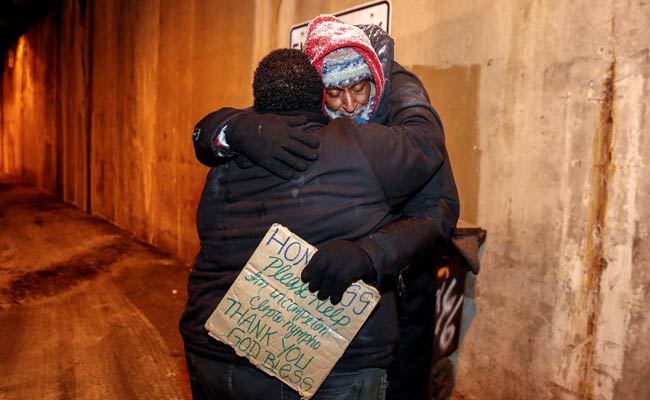 Blanca Rodriguez, a 52-year-old homeless woman, spent a night at one of the warming centres Chicago set up ahead of the Arctic-like weather that froze a large swath of the United States this week.

But then Rodriguez, who was born in Monterrey, Mexico, went back to the homeless encampment on the North Side of Chicago where she had been staying the past couple of months, complaining the shelter took away her medications for high blood pressure and "a bad kidney".

When volunteers asked Rodriguez if she wanted to go to a shelter rather than spend the bitter night in a tent, "I said no, forget it."

Homeless people in the U.S. Midwest are used to cold winters. But a displacement of the polar vortex this week sent temperatures as low as minus 22 Fahrenheit (minus 30 Celsius) earlier this week. Weatherman had warned of the dangers of spending too long outside - frostbite could start within minutes.

Over 80,000 people are considered homeless in Chicago, according to the Chicago Coalition of the Homeless. Around 80 percent of them "live doubled-up in the homes of others due to hardship." The remainder are in shelters or sleep outside, it says.

Although some homeless people like Rodriguez chose to stay in their downtown encampments, the city said their efforts were largely successful.

"Last night, our usual shelter beds were at 99 percent capacity," said Melissa Stratton, director of Communications and Government Affairs at the Chicago Office of Emergency Management and Communications.

In Chicago, the police are not empowered to force homeless people off the streets.

Many of the city's homeless would rather take their chances outdoors in subzero conditions than submit to "the rules that are in place at the shelters," Chicago police officer Michelle Tannehill said.

The Salvation Army in Chicago, along with other volunteer groups, had participated in the annual "point-in-time" count of the homeless on Jan. 24. The count, done by cities across the nation in January, provides a snapshot of homelessness in the United States to the federal Department of Housing and Urban Development (HUD), which determines how to disburse funds based on the data.

Pittsburgh did its point-in-time count on Wednesday on one of the coldest nights in decades. Volunteers from the Northside Homeless Alliance handed out hats, gloves and blankets to some of the city's estimated 1,200 homeless people, said its director, Charles Chapman. They were one of several organizations that fanned out across the city of 300,000 people for the count, which asks the homeless a series of questions in a survey.

The January count last year across the nation found roughly 553,000 people experienced homelessness in the United States, a HUD report released in December said. About two-thirds were staying in shelters, and the remainder in unsheltered locations such as on the street or in abandoned buildings.

The unsheltered population increased by 2 percent between 2017 and 2018, the HUD report said, partly due to a decline in homeless people staying in shelters.

Underneath an Interstate 90 overpass on the North Side of Chicago, Alvin Henry was another one eschewing the idea of staying in a shelter.

He had been asked to go to a shelter, but declined.

"I don't do shelters. I just don't. They not clean enough for me," Henry said on Thursday night, adding people smell at shelters.

Henry spent the last couple of cold nights under 12 blankets in a tent. "I just gotta get up under there and I'm good," said Henry, a Chicago native. "It was all right for me."

(This story has not been edited by NDTV staff and is auto-generated from a syndicated feed.)
Comments
US homelessUS cold