In An Odd Twist, Apache Woman Holds Key To New US Border Wall

Since it was impossible to build the wall in the middle of the Rio Grande River, which marks the natural border with Mexico, US federal authorities built it a couple miles (kilometers) north of the riverbank. 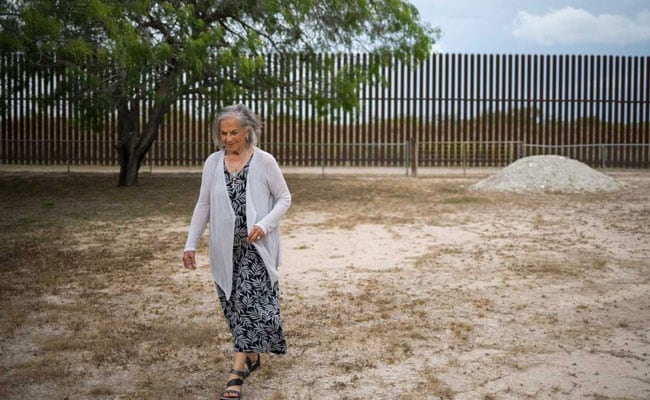 A hulking border wall crosses Lipan Apache's backyard, something she says feels like a "violation." (AFP)

Eloisa Tamez is Lipan Apache and her ancestors owned her shrinking parcel of desert on the US border a century before the war that imposed the boundary between Mexico and Texas.

Now a hulking border wall crosses her backyard, something she says feels like a "violation."

That part of her property, in the border town of El Calaboz in the far south of Texas, is a vacant area split down the middle by the rusty iron fence, which stands 18 feet (5.5 meters) high.

Since it was impossible to build the wall in the middle of the Rio Grande River, which marks the natural border with Mexico, US federal authorities built it a couple miles (kilometers) north of the riverbank.

That meant some of the lands through which the wall already passes -- and will continue to be built, if President Donald Trump gets his way -- are owned by native tribes and private farmers.

This is what happened almost 10 years ago to Tamez, a nursing professor at the University of Texas Rio Grande Valley and a tribal rights activist.

"It makes me very sad to see what happened to my property, which was valued by my parents not for the money, but for what the land produced for us, because my father was a farmer," the 83-year-old told AFP.

Referring to the land, she said: "They violate it. It's very sad to see that happening and I'm glad that my parents didn't live to see it."

When federal authorities installed their fence, they divided her land not exactly in half.

Then they gave her a key to open the gate that allows her to access the other side of her ancestral land, three acres (1.2 hectares) of desert dotted with cactus and mesquite.

That is all that is left of the 12,000 acres that once belonged to their Lipan Apache ancestors since the 18th century, thanks to a land grant from the Spanish crown.

In 2009, after losing a US federal lawsuit, Tamez was forced to accept compensation of $56,000, which she donated to nursing scholarships on behalf of her parents.

Other farmers, whose lands were entirely to the south of the wall, also received access codes to their properties.

But most of the cases were settled with appropriations from the federal government for values that averaged $12,600, according to an investigation by National Public Radio.

Such land appropriations could multiply if Trump succeeds in walling most or all of the border, a third of which already has fencing.

More than half of the 310,531 illegal migrants detained by US Customs and Border Patrol in the fiscal year that ended on September 30 were captured in Texas, official figures show.

That is why the family separation of migrants that attracted international attention in the last two months had its epicenter in this state, particularly in the Rio Grande Valley region where Tamez lives.

It is home to the largest detention center for undocumented migrants and asylum seekers (nicknamed "Ursula," with more than a thousand detainees) and the "Casa Padre" shelter for minors, a former Walmart box store with a capacity to hold about 1,400 children.

Since May, more than 2,300 children were separated from their parents or guardians when they were detained while crossing the border, illegally or seeking asylum, under President Donald Trump's "zero tolerance" policy.

"The current migration crisis is the result of the inability of Congress to enforce the law for decades," Tamez said.

An immigration reform bill that included the president's proposal for a $25 billion wall that would dissect nearly 2,000 miles (3,200 kilometers) of the border failed again Wednesday in Congress.

"The loss of our lands to build a wall is a Band-Aid on the migration crisis, not the solution," said Tamez. "Congress has not been able to govern as it should, instead they are playing politics.

"It is not the first time that they violate our rights by taking away our land," the native activist continued, evoking an appropriation that took place in 1936.

And, if the Trump plan is successful, it will not be the last.

(This story has not been edited by NDTV staff and is auto-generated from a syndicated feed.)
Promoted
Listen to the latest songs, only on JioSaavn.com
Comments
apache womanmexico US wall