In A Personal Letter, Trump Invited Putin To The 2013 Miss Universe Pageant

At the bottom of the typed letter, Donald Trump scrawled a postscript adding that he looked forward to seeing "beautiful" women during his trip. 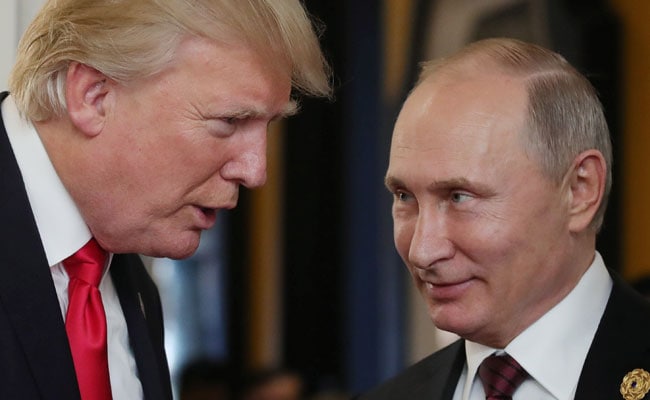 At the time, Donald Trump made no secret that he hoped Putin would attend the Miss Universe pageant

Donald Trump was so eager to have Vladimir Putin attend the 2013 Miss Universe pageant in Moscow that he wrote a personal letter to the Russian president inviting him to the event, according to multiple people familiar with the document.

At the bottom of the typed letter, Trump scrawled a postscript adding that he looked forward to seeing "beautiful" women during his trip.

Trump's letter to Putin, which was described by people with knowledge of its contents, shows how interested he was in attracting the personal attention of the Russian president. The real estate magnate, who owned the Miss Universe pageant, wrote the note at a time when he was looking to expand his brand to Russia.

The letter, the first known attempt at direct outreach by Trump to Putin, has been turned over to investigators probing Russia's interference in the 2016 campaign. It is unclear whether Trump's missive was ever delivered to the Russian president - and if so, whether Putin responded.

John Dowd, an attorney for President Trump, said he was not familiar with the letter. "It's all nonsense," he said. A White House spokesman and attorneys for the Trump Organization declined to comment.

At the time, Trump made no secret that he hoped Putin would attend the Miss Universe pageant, which was being held in Russia for the first time.

In a June 18, 2013, tweet, Trump wrote: "Do you think Putin will be going to The Miss Universe Pageant in November in Moscow - if so, will he become my new best friend?"

His letter to Putin was written that month, according to the people familiar with the document.

The pageant was part of a years-long effort to bring the Trump name to Russia. Trump has repeatedly sought to build a tower in Russia since the late 1980s, without success.

But in 2013, a new opportunity emerged through another business he owned: the Miss Universe pageant.

Trump was approached by billionaire Moscow developer Aras Agalarov and his pop star son, Emin, who said they would pay to bring Miss Universe to the Russian capital.

Trump was eager for Putin to attend the event, but the Russian president canceled a planned appearance at the last minute, Aras Agalarov told The Washington Post in a 2016 interview.

"That was a very complicated situation then, because I promised Trump he would meet Putin," Agalarov said.

Instead, Putin sent a "friendly" letter and a gift of a Russian lacquered box, he said. "So he was leaving with very warm feelings," Agalarov said. "He was very happy."

During the pageant, Trump suggested that Putin was following the event and Trump's role in it. "I do have a relationship, and I can tell you that he's very interested in what we're doing here today," Trump told MSNBC while in Moscow.

Investigators for special counsel Robert Mueller III have asked witnesses questions about the Miss Universe pageant and Trump's interest in having Putin attend the event, according to people familiar with the inquiry.

Mueller's team also has examined Trump's relationship with the Agalarovs, which extended beyond the 2013 pageant.

In June 2016, a music promoter representing Emin Agalarov emailed one of Trump's sons, Donald Trump Jr., and asked if he would meet with a Russian lawyer who the promoter said could give him damaging information about Democratic presidential candidate Hillary Clinton.

"If it's what you say I love it especially later in the summer," Trump Jr. responded. Days later, he met with the lawyer at Trump Tower in New York. A U.S.-based employee for the Agalarovs also attended, as did Donald Trump's son-in-law Jared Kushner and then-campaign chairman Paul Manafort. Trump Jr. has said that no information about Clinton was provided at the meeting.

Over the years, Donald Trump has offered inconsistent stories about whether he met Putin before he became president.

In October 2013, a month before the Miss Universe pageant, he told late-night host David Letterman that Putin was a "tough guy" and that he had "met him once."

During a Republican primary debate in November 2015, Trump said that he knew Putin "very well."

By that time, Russia was widely suspected of stealing emails from the Democratic National Committee, which had been published by WikiLeaks.

In the same news conference, Trump called on Russia to find and release Clinton's emails.

The following month, at a campaign rally in Wisconsin, Trump defended himself from criticism from Clinton that he wanted to befriend Putin: "I'm saying to myself, what's wrong with that? That's good."

Promoted
Listen to the latest songs, only on JioSaavn.com
The Washington Post's Josh Dawsey and Tom Hamburger contributed to this report.