The highlight of the afternoon was Nicole Kushner Meyer, a principal for the company, who was introduced in promotional materials as Jared Kushner's sister. 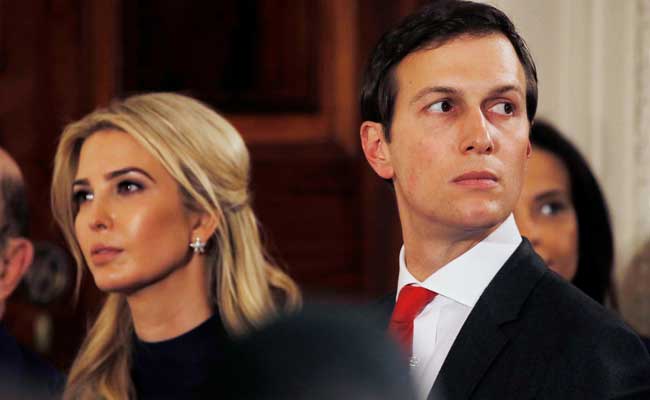 Beijing: The Kushner family came to the United States as refugees, worked hard and made it big - and if you invest in Kushner properties, so can you.

Over several hours of slide shows and presentations, representatives from the Kushner family business urged Chinese citizens gathered at a Ritz-Carlton hotel to consider investing hundreds of thousands of dollars in a New Jersey luxury apartment complex that would help them secure what's known as an investor visa.

The potential investors were advised to invest sooner rather than later in case visa rules change under the Trump administration."Invest early, and you will invest under the old rules," one speaker said.

The tagline on a brochure for the event: "Invest $500,000 and immigrate to the United States."

And the highlight of the afternoon was Meyer, a principal for the company, who was introduced in promotional materials as Jared's sister. 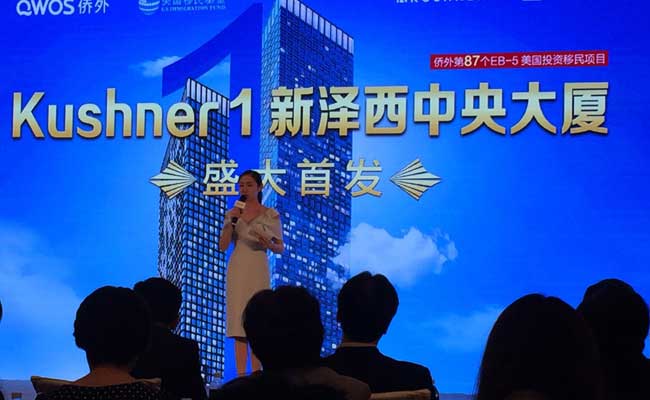 Chinese investors were advised to invest before a change in US visa rules. (The Washington Post)
The event underscores the extent to which Kushner's private business interests have the potential to collide with his powerful role as a top official in his father-in-law's White House, particularly when it comes to China, where Kushner has become a crucial diplomatic channel between Beijing and the new administration.

While Kushner has reported divesting from elements of the family business, including the specific project that his sister pitched in Beijing, the session Saturday demonstrated that the company is perceived as enjoying close ties to the Trump administration. Ethics laws prohibit government officials from profiting personally from their public-sector work.

Watchdogs and ethics experts on Saturday criticized the Beijing event as an attempt to cash in on Kushner's newfound proximity to power.

"It's incredibly stupid and highly inappropriate," said Richard Painter, the former chief White House ethics lawyer in President George W. Bush's administration, who has become a vocal critic of the Trump administration. "They clearly imply that the Kushners are going to make sure you get your visa. . . . They're [Chinese applicants] not going to take a chance. Of course they're going to want to invest."

Among the wealthy elites in China, family, business and politics are all deeply intertwined. Every branch of the Communist Party, every province and city often operates as a fiefdom for those in power, allowing leaders special, lucrative access to policy, land and government contracts. There is even a name for second-generation sons and daughters of wealthy business executives and government officials - such as Ivanka Trump and Jared Kushner - who have access to power through family ties. They are called "fuerdai."
The EB-5 immigrant investor visa program that Meyer discussed Saturday allows rich foreign investors who are willing to plunk down large investments in U.S. projects that create jobs to apply to immigrate to the United States.

Bloomberg reported in March 2016 that the program has been used to the benefit both the Trump and Kushner family businesses. Before joining the White House, as chief executive of his family's real estate company, Jared Kushner raised $50 million from Chinese EB-5 applicants for a Trump-branded apartment building in Jersey City, according to the report.

Blake Roberts, an attorney at the WilmerHale law firm who serves as Kushner's personal counsel, said: "Mr. Kushner divested his interests in the One Journal Square project by selling them to a family trust that he is not a beneficiary of, a mechanism suggested by the Office of Government Ethics. As previously stated, he will recuse from particular matters concerning the EB-5 visa program."
The EB-5 program has been criticized by members of Congress from both parties who have said the program in essence sells visas to the wealthiest foreigners.

The program has been extremely popular among rich Chinese, who call it the "golden visa" and are eager to get their families - and their wealth - out of the country. The fact that some use it to move their money out illegally, however, has made the program unpopular with the Chinese authorities.

The program was launched with the goal of securing investment and creating jobs. But instead, in recent years, many real estate developers have used the program as a source of cheap financing by using foreign investors, especially from China, for flashy projects in Manhattan and other city centers.

A Government Accountability Office report in 2015 found the EB-5 program carried a high risk of fraud, was rife with counterfeit documentation and had "no reliable method to verify the source of the funds of petitioners."

Since Donald Trump became president, rumors have circulated among the wealthy of the world about the future of the EB-5 program, given Trump's repeated vows to crack down on immigration and the increased congressional scrutiny of EB-5s. That has sent many high-rolling foreigners flocking to apply.
The program, however, is especially popular in China, with estimates in recent years showing that more than 80 percent of EB-5 visas were issued to Chinese investors.

Saturday's event in Beijing was hosted by the Chinese company Qiaowai, which connects U.S. companies with Chinese investors. Qiaowai is working with the Kushner company to secure funding for Kushner 1, the New Jersey project presented to investors, also known as One Journal Square. Promotional materials tout the buildings' proximity to Manhattan and note that the project will create more than 6,000 jobs.

"This project has stable funding, creates sufficient jobs and guarantees the safety of investors' money," one description reads.
Although there was no visible reference to Trump, the materials noted the Kushner family's "celebrity" status.

Kushner's personal financial disclosure form reflects that he divested his interest in K One Journal Square LLC. The form described the asset as undeveloped real estate in Jersey City.

Because the asset was already divested, Kushner's filing does not reflect its estimated value. But he did report between $1 million and $5 million in income connected to the project.

At Saturday's event, attendee Wang Yun, a Chinese investor, said the Kushner family's ties to Trump were an obvious part of the project's appeal.

"Even though this is the project of the son-in-law's family, of course it is still affiliated," Wang said.

Wang reasoned that the link to Trump would be a boon if the presidency goes well but could be disastrous if it does not: "We heard that there are rumors that he is the most likely to be impeached president in American history. That's why I doubt this project."

Many of the people who attended the event declined to be interviewed, citing privacy concerns, or were blocked by organizers from speaking to the news media.

Although the event was publicly advertised in Beijing, the hosts were exceptionally anxious about the presence of reporters.

Journalists were initially seated at the back of the ballroom, but as the presentations got underway, a public-relations representative asked The Washington Post to leave, saying the presence of foreign reporters threatened the "stability" of the event.

At one point, organizers grabbed a reporter's phone and backpack to try to force that person to leave. Later, as investors started leaving the ballroom, organizers physically surrounded attendees to prevent them from giving interviews.

Asked why reporters were asked to leave, a PR person who declined to identify herself said simply, "This is not the story we want."

Promoted
Listen to the latest songs, only on JioSaavn.com
- - -

(Wan reported from Washington. Amy Brittain and Jonathan O'Connell in Washington and Congcong Zhang in Beijing contributed to this report.)