In A 30-Minute Interview, President Trump Made 24 False Or Misleading Claims

Some of the interview was off the record, so it's possible the rate of false claims per minute is higher. 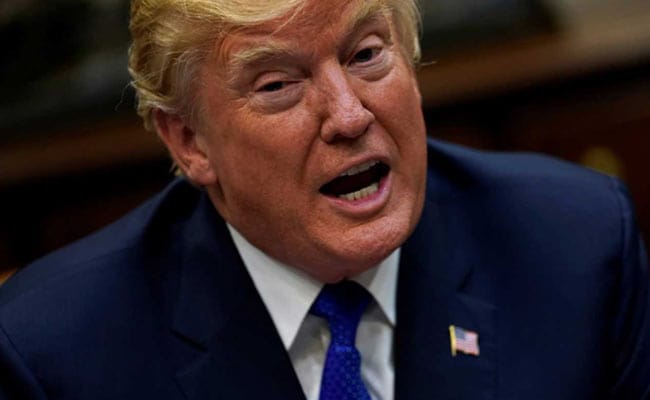 Donald Trump falsely labels nonpartisan investigations as made up by Democrats. (File)

President Donald Trump gave an impromptu half-hour interview with The New York Times on Dec. 28. We combed through the transcript and here's a quick round-up of the false, misleading or dubious claims that he made, at rate of one claim every 75 seconds. (Some of the interview was off the record, so it's possible the rate of false claims per minute is higher.)

Trump appears to be referring to an interview with Sen. Dianne Feinstein, D-Calif., a member of the Senate Intelligence Committee. She did not flatly say there was no collusion and instead was more nuanced. Asked by CNN's Jake Tapper on Nov. 5 whether she had "seen any evidence that this dirt, these emails, were ever given to the Trump campaign," she replied: "Not so far." Tapper than asked: "Have you seen any communications that suggested that the Trump campaign wanted them to release them through a different means?" She answered: "I have not."

"I think it's been proven that there is no collusion."

Trump is entitled to his own opinion but he sidesteps the fact that the investigation has revealed that members of the Trump campaign interacted with Russians at least 31 times throughout the campaign. There are at least 19 known meetings, in addition to the indictments or guilty pleas of his campaign manager, national security adviser and others.

"There was collusion with the Russians and the Democrats. A lot of collusion. . . . Starting with the dossier. But going into so many other elements. And Podesta's firm."

Trump has falsely accused Clinton campaign manager John Podesta of being involved with a Russian company. Tony Podesta co-founded the Podesta Group, a lobbying firm, with his brother John. But it's a U.S.-based company, not a company in Russia. Trump likely is referring to the Podesta Group being paid $170,000 over six months to represent Sberbank, a Russian bank. The Podesta Group said its work for Sberbank USA was "never about getting sanctions lifted," and "was simply about helping to clarify to what extent our client, the U.S. subsidiary [of Sberbank], was subject to sanctions. We confirmed they were not." As for alleged collusion between the Democrats and Russia, Trump is referring to the fact that Fusion GPS, the political research firm which assembled the dossier as part of an assignment for Democrats, relied on a British intelligence agent who used Russian sources for his research. So that's a rather big stretch.

There is no evidence that Hillary Clinton campaigned for the popular vote, which Trump has previously has said he would have won if not for fraud. Clinton campaigned in many battleground states, including Republican-leaning ones where she thought she had a chance. She did not campaign as much in two states - Michigan and Wisconsin - that were considered locks for Democrats but which Trump narrowly won. Clinton won the popular vote by nearly 3 million. If 40,000 votes had switched in three states, Trump would have also lost the Electoral College.

"Paul [Manafort] only worked for me for a few months."

Trump skips over lightly the fact that Manafort, now under indictment, was his campaign manager in the critical period in which he secured the nomination and accepted it at the GOP convention.

"There was tremendous collusion on behalf of the Russians and the Democrats. There was no collusion with respect to my campaign."

This is a breathtakingly false statement. Little evidence has emerged of any collusion between the Democrats and Russia, whereas evidence has emerged of many contacts between Trump campaign officials and Russian-linked individuals. The FBI, CIA and National Security Agency earlier this year concluded that Russian President Vladimir Putin and his government "aspired to help President-elect Trump's election chances when possible by discrediting Secretary Clinton and publicly contrasting her unfavorably to him."

"What I've done is, I have absolute right to do what I want to do with the Justice Department."

Presidents do not have unfettered right to interfere with Justice Department investigations, unless they actively seeking a constitutional crisis.

West Virginia's gross domestic product increased 3 percent in the first quarter of 2017. The recent bump is due in part to the increased price of metallurgic coal, which is used to make steel, and a price increase in natural gas exports. West Virginia produces roughly 5 percent of the natural gas in the U.S. and as the price of natural gas rises, the demand for coal increases, spurring growth in the state. Trump can't take credit for the change in prices, which fluctuate with market forces.

Trump echoes a conspiracy theory that a criminal case involving a Pakistani information technology specialist who worked for Rep. Debbie Wasserman Schultz - who had chaired the Democratic National Committee - was somehow related to the Russian hack of DNC emails. The case involves a fraudulent loan, and no evidence has emerged to connect it to the Russia investigation.

Trump is falsely labeling nonpartisan investigations as made up by Democrats. The CIA concluded in 2016 that Russia intervened in the U.S. presidential election to help elect Trump, an assessment backed up by FBI Director James Comey and then-Director of National Intelligence James Clapper. As we noted, the intelligence community released a declassified report expressing "high confidence" in this judgement. Senate and House committees led by Republicans have begun their own investigations, and a special prosecutor has been appointed. Meanwhile, Democrats obviously do not have an Electoral College lock. According to a tally by John Pitney of Claremont McKenna College, every Republican president since Rutherford Hayes in 1876 won a larger share of the electoral college votes than Trump, with the exception of George W. Bush (twice) and Nixon in 1968.

"I was for Strange, and I brought Strange up 20 points. Just so you understand. When I endorsed him, he was in fifth place. He went way up. Almost 20 points."

Polls indicate that Trump's endorsement made little difference - and in fact Strange lost to Ray Moore by a greater margin than polls suggested at the time of Trump's endorsement. While Trump says Strange was in fifth place, there were only three candidates in the GOP primary.

"I endorsed him [Alabama senate candidate Roy Moore]. It became a much closer race because of my endorsement. People don't say that. They say, Oh, Donald Trump lost. I didn't lose, I brought him up a lot."

Polls can vary, but there is little evidence this is the case. The fact remains that Moore lost an election in a state where Democrats usually lose by double digits.

Trump, who previously would cite a number of $6 trillion, is lumping together the wars in Iraq (in the Middle East) and Afghanistan (in South Asia), which together cost about $1.6 trillion from 2001 to 2014. He is also adding in estimates of future spending, such as interest on the debt and veterans' care for the next three decades.

Trump signed an executive order encouraging the formation of health plans across state lines. But there is still a law in place which exempts insurance companies from aspects of federal antitrust law and ensures that individual states remained the primary regulators of insurance.

Lawmakers who dealt with Trump on taxes and especially health care privately told reporters they were shocked how little he knew about these issues.

"We've created associations, millions of people are joining associations. Millions. That were formerly in Obamacare or didn't have insurance. Or didn't have health care. Millions of people."
Trump is referring to an executive order, mentioned above, but it has no force in law on its own and no one has yet joined these associations. The rules spelling out how the executive order would work have not been issued yet, so Trump is simply making up his "millions" number.

"Now that the individual mandate is officially killed, people have no idea how big a deal that was. It's the most unpopular part of Obamacare. But now, Obamacare is essentially. . . . You know, you saw this. . . . It's basically dead over a period of time."
While the individual mandate was an important incentive for Americans to seek health insurance, it was only one part of a far-reaching law that remains intact. The repeal does not take effect until 2019, and enrollment in Obamacare has remained strong. The Congressional Budget Office says the marketplaces are expected to remain stable for years.

"We see the drugs pouring into the country, we need the wall."

The wall will have virtually no effect on drugs coming into the country. According to reports by the DEA, the majority of drugs are smuggled through legal ports of entry or smuggled through underground tunnels.

"They have a lottery in these countries. They take the worst people in the country, they put 'em into the lottery, then they have a handful of bad, worse ones, and they put them out. 'Oh, these are the people the United States. . . .' . . . We're gonna get rid of the lottery."

This is a gross misrepresentation of the diversity visa program. Individuals apply for the visa system, and must have at least a high school diploma or work in specific industries to be eligible for the program. As the term "lottery" implies, applicants are selected via a randomized computer drawing. The selected applicants undergo a background check before entering the country, and some applicants undergo an additional in-depth review if they are considered a security risk.

"I like very much President Xi. He treated me better than anybody's ever been treated in the history of China."

The Chinese put on a show for Trump, knowing he likes them, but this is a fairly ridiculous comment to make, especially given the limited interactions between the two men - and China's 3,500-year history.

"When I campaigned, I was very tough on China in terms of trade. They made - last year, we had a trade deficit with China of $350 billion, minimum."

The trade deficit in goods and services in 2016 with China was $310 billion. Trump often just cites the goods deficit, which was $347 billion, according to the U.S. Trade Representative. Under the Trump administration, the trade deficit with China has increased seven percent so far in 2017.

"We lost $71 billion a year with Mexico, can you believe it?"
Trump, as is his practice, inflates the size of the trade deficit by only counting goods, not goods and services. The 2016 trade deficit with Mexico was $55 billion, according to the U.S. Trade Representative.

In recounting a conversation with Canadian Prime Minister Justin Trudeau, Trump gets his facts quite wrong. Trudeau said Canada had a total trade deficit with the United States while Trump insisted it was the other way around. In reality, the U.S. goods trade deficit with Canada was $12.1 billion in 2016, but the U.S. services trade surplus with Canada was $24.6 billion in 2016, according to the U.S. Trade Representative. So Trudeau was right, according to U.S. government data.

(This story has not been edited by NDTV staff and is auto-generated from a syndicated feed.)
Comments
Donald Trump InterviewUS President