Imran Khan was hit in the leg and at least 10 others wounded when a gunman sprayed a salvo from the kerbside. 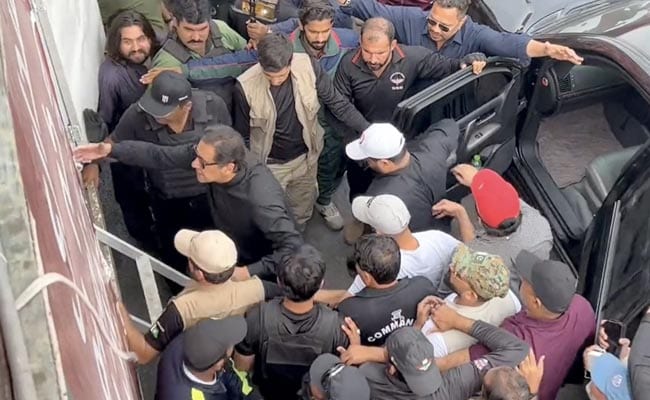 For days, Imran Khan's slow-moving "long march" rally has been a hive of activity with reporters and aides swarming Pakistan's former prime minister as he delivered speeches to thousands of supporters.

But on Friday morning, the modified shipping container he would often stand atop was a blood-splattered, bullet-pierced husk -- a reminder of Pakistan's sinister political violence.

"This is a horrible tradition that we have," lamented local businessman Osman Butt, who witnessed Thursday's attack on Khan.

Khan was hit in the leg and at least 10 others wounded when a gunman sprayed a salvo from the kerbside.

The shooting has grim echoes of the brutal 2007 assassination of former prime minister Benazir Bhutto, killed in a suicide attack as she rallied from a vehicle roof hatch in the city of Rawalpindi.

She had already survived an earlier attack on her motorcade months earlier.

Seventy year-old Khan was not seriously wounded and was able to acknowledge his devoted supporters as he was taken to hospital.

"Imran came out of the container after a while and made the victory sign, asking us to have confidence and be patient," said 28 year-old witness Muhammad Usman, torn between pride and worry.

In the wake of the attack in the eastern city of Wazirabad -- where Khan's march on the capital demanding snap elections ground to a halt -- teenage boys tore around the city on motorbikes trailing fluttering party flags.

They chanted: "Long live Imran Khan!" above the whine of their engines.

Doctors in Lahore say Khan is recovering well, and an aide said he was expected to be released from hospital later Friday.

Pakistan has been riven by decades of militant violence and politicians are often in the crosshairs of assassination attempts.

Khan's team has warned his life is in danger since he was ousted in a no-confidence vote in April.

Thursday's assault -- apparently by a lone gunman now in custody -- has upped the ante in the south Asian nation, which has been gripped by economic and political turmoil since his three-and-a-half year stretch in power ended.

A smattering of supporters gathered at the crime scene on Friday morning, some sporting the red and green of Khan's Pakistan Tehreek-e-Insaf (PTI) party.

"Such incidents will lead to chaos and anarchy," warned 25-year-old Ahmad Khan.

Guarded by armed officers, crime scene investigators combed over the container. A police official, speaking to AFP on condition of anonymity, said they were performing a reconstruction of the shooting.

Qadir Khan Sulemankhel, a 37-year-old supporter, said: "Our leader is doing well. He is a braveheart and a man of steel who will soon join us here again."

"We are ready to make any sacrifice needed for our leader," he said. "We don't feel demoralised."

"Xi Jinping's Real Mission Was To Get Me Fired": Ex Top US Official