Pakistan "Out Of Pressure" Thanks To $6 Billion Saudi Loan: Imran Khan

Imran Khan indicated that "more good news" is in store, as Pakistan is in talk with two more "friendly nations". 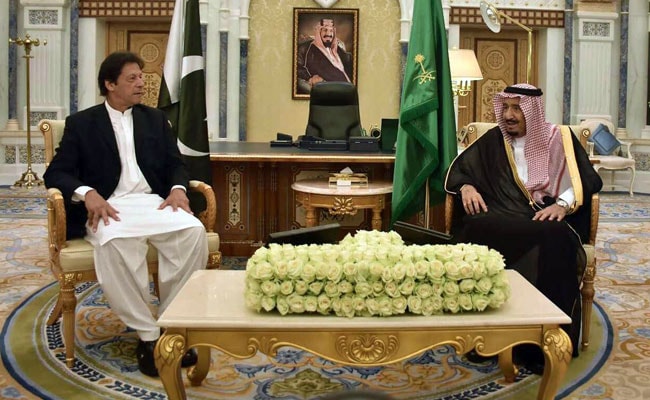 Imran Khan criticised the preceding government for their financial condition

"My Pakistanis, today I am here with a good news for all of you. We were facing really hard times. We were highly pressurised into paying heavy debts. But thanks to Saudi Arab's extension of assistance, we are out of the pressure," he said during a public address on Wednesday.

Mentioning that the nation was "at the brink of becoming defaulters" due to limited resources, Imran Khan continued, "We had two options; either go to International Monetary Fund (IMF) or seek help from friendly countries. If we had gone to IMF directly, we'd have had to borrow more money and that would have meant stricter conditions which would crush our poor strata of society. But now we are in a better position."

He further indicated that "more good news" is in store, as Pakistan is in talk with two more "friendly nations".

Mr Khan also stated that Pakistan will be acting as a mediator in the on-going crisis of Yemen so as to "unite the Muslim World".

Launching a scathing attack at the preceding Pakistan governments, Imran Khan claimed that the governments had "accumulated Pakistan's debts from Rs. 6,000 billion to Rs. 30,000 billion" in addition to the circular debt of Rs 1,200 billion left behind by the previous government.

He went ahead to outline all the cases of corruption which are emerging and are connected to the former ruling parties during the speech.

Promising "good times ahead", the Prime Minister further said, "Nations do face hard times but these adversities are not there to be intimidated of. I have said this before and I will say this today again; do not worry, have confidence, good times are about to come."

He ended the note by saying, "Let me be very clear, hard times are about dissipated, good times are ahead. There will be a time soon when we will be giving loans to other countries instead of taking one."

Imran Khan's speech comes after Pakistan announced that they secured loans to the tune of $6 billion in talks held with Saudi Arabia on the sidelines of the Future Investment Initiative conference in Riyadh.

Saudi's financial bailout to Pakistan comes in the midst of the Islamic nation's current account deficit of $18 billion, which had triggered Pakistan to seek assistance from the IMF earlier this month.

A delegation from IMF is scheduled to visit the nation on November 7 to discuss the loan amount that is required by Pakistan, according to the Dawn.