The maiden session of the 15th National Assembly concluded after outgoing Speaker Ayaz Sadiq administered the oath to the leaders in the 342-member house. 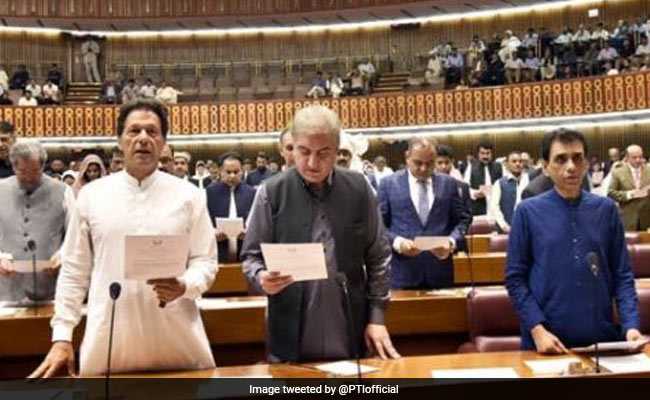 Imran Khan and the 328 other members signed their presence in a register.

Pakistan's Prime Minister-in-waiting Imran Khan was among the 329 newly-elected members of the National Assembly who took the oath today, setting the stage for the cricketer-turned-politician to form the next government, only the second democratic transition of power.

The maiden session of the 15th National Assembly, the lower house of Parliament, concluded after outgoing Speaker Ayaz Sadiq administered the oath to the leaders in the 342-member house.

The 329 members signed their presence in a register.

The National Assembly session was then adjourned till 10 AM, August 15, Geo News reported.

President Mamnoon Hussain had summoned the maiden session at 10 AM in parliament house today, 19 days after Mr Khan-led Pakistan Tehreek-e-Insaf (PTI) party emerged as the single largest in the general elections.

The PTI chief shook hands and posed for a photo with Mr Bilawal, who is entering the National Assembly for his maiden term, Dawn reported.

The Speaker announced that elections of the new Speaker and his deputy will be held on August 15.

The PTI has nominated Asad Qaisar for Speaker, while opposition has named Syed Khurshid Shah of the PPP as the joint opposition candidate for the post.

Earlier, the maiden session started with the National Anthem, followed by recitation from the Holy Quran.

Mr Khan looked prominent as he sat in the front row of the parliament house close to the chair of the leader of the house, which he is eventually expected to take after formal election as Prime Minister.

Strict security measures have been put in place to avoid any untoward incident during the proceedings and irrelevant persons have been barred from entering the house.

Party sources said that the list of the Cabinet has not been finalised but there is a general consensus that Shah Mahmood Qureshi will be the new Foreign Minister and Pervez Khattak the new Interior Minister. Asad Umar is expected to get the key post of Finance Minister.

The PTI has nominated Mr Khan for the top post and he is scheduled to take oath on August 18 at the President House.

The combined opposition has nominated Shehbaz Sharif against Mr Khan.

The new government faces a strong opposition as the PML-N has a final tally of 82 seats, followed by the PPP with 53 and Muttahida Majlis-e-Amal (MMA) 15 seats. The three have joined hands and formed the combined opposition.

This will be the third consecutive democratic government in Pakistan since 2008 when military ruler Musharraf announced general elections after serving as president from 2001 to 2008 following a coup in 1999.

The PPP formed the government in 2008, followed by the PML-N led by former prime minister Nawaz Sharif in 2013.

Pakistan's powerful military has ruled the country through various coups for nearly half of the country's history since independence in 1947. Even during the civilian rule, the generals have wielded enormous power, setting the agenda for the country's foreign and security policies.

PakistanImran Khan and 329 others take oath