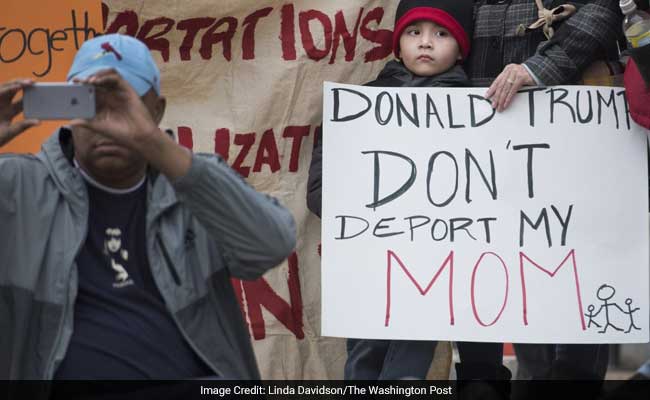 A young boy and his mother at a rally to protest recent raids nationwide by US Immigration and Customs.

Fear and panic have gripped America's immigrant community as reports circulate that federal agents have become newly aggressive under President Donald Trump, who campaigned for office with a vow to create a "deportation force."

Federal officials insist they have not made fundamental changes in enforcement actions, and they deny stopping people randomly at checkpoints or conducting "sweeps" of locations where undocumented immigrants are common.

But anxiety among immigrants spiked last week after the Immigration and Customs Enforcement (ICE) agency conducted a series of enforcement actions in large metropolitan areas, detaining hundreds of people in Chicago, Los Angeles, New York, Atlanta and other cities.

"These raids have struck fear in the hearts of the immigrant community as many fear that President Trump's promised 'deportation force' is now in full-swing," the lawmakers wrote in a letter to Homan.

What's certain is that even if ICE and other officials say this is business as usual, many immigrants find more persuasive the words and actions of President Trump, whose political rise was propelled by anti-immigrant rhetoric, a vow to build a wall on the Mexican border and the promise to deport 3 million criminal aliens.

On Jan. 25, five days after taking the oath of office, he issued an executive order titled "Enhancing Public Safety in the Interior of the United States." Media attention focused on Trump's call for an end to federal funds for "sanctuary cities," which do not automatically hand over illegal immigrants who come to the attention of local law enforcement.

But the order also expanded the list of deportation priorities to include any noncitizen who is charged with a criminal offense of any kind, or who is suspected of committing criminal acts or being dishonest with immigration officials. The order gives broader leeway to ICE officers in deciding whether someone poses "a risk to public safety."

For immigrant rights activists, the rules of engagement have clearly changed.

"Donald Trump has effectively created a way to deport individuals who have been accused, charged or convicted of anything from murder to jaywalking," said Angelica Salas, executive director of the Coalition for Humane Immigrant Rights of Los Angeles (CHIRLA).

Fear of being detained or deported could lead many people to avoid going to work, school or to public places in coming days, said Salas. She noted that one person detained by ICE last week had been at his job in a Target store.

"ICE wants us to believe they have removed a bunch of felons who were just plotting their next crime," said Salas. "We know that ICE picked up some collaterals, people who happened to be nearby when officers arrived looking for someone else, and we think what we've just witnessed is how an emboldened ICE will operate."

Several undocumented Los Angeles residents told The Washington Post that they did not want to be identified because they fear the Trump administration could use newspaper coverage to craft a list of deportation targets.

Under policies crafted during President Barack Obama's second term, priority deportees included people who had been convicted of murder and other violent crimes as well as certain drug offenses and gang involvement. Obama's policies called on ICE officials to avoid detaining, whenever possible, nursing mothers and those with serious medical conditions.

ICE last week has put out messages on social media suggesting that the enforcement actions were not part of a major crackdown ordered by Trump. "ICE immigration enforcement actions target specific individuals according to the laws passed by Congress," reads a tweet posted Thursday by ICE.

ICE spokeswoman Sarah Rodriguez wrote in an email to The Washington Post: "ICE does not use checkpoints, nor do we use sweeping raids. We use targeted enforcement actions against specific individuals to make these arrests."

Immigration rights activists are hoping to call attention to the actions of ICE while at the same time preventing full-scale panic among people who may be avoiding going to work or riding buses out of fear of being detained.

"We're not trying to sow hysteria here, so we're not reporting rumors," said Elizabeth Alex, a regional field director in Baltimore County for CASA, an immigrant advocacy group. "But it is fair to say we are seeing new tactics across the county."

She said ICE agents detained a handful of people after they exited the county courthouse in Towson, Maryland. In one incident, on Monday, an undocumented immigrant who had gone to the courthouse to pay a ticket for driving on a suspended license was taken into custody by federal agents as he left, she said.

She added that CASA has documented cases of illegal immigrants being taken into custody in recent weeks after they showed up for check-in meetings with parole and probation officers in the county.

In Montgomery County, considered a sanctuary jurisdiction, lawmakers and dozens of advocates for the state's immigrant population fanned out Friday evening and Saturday morning after unfounded rumors circulated on Facebook that a public bus had been raided by federal immigration officers. As the rumor went, officers boarded a bus in the Wheaton area, home to a sizable chunk of the Washington area's Salvadoran community, and began removing riders who could not produce identification.

Rodriguez denied that, and local officials said they found no evidence to back up the rumor either. Similar unfounded rumors popped up elsewhere in the country, including Portland, Oregon, and Austin.

The epicenter for the enforcement actions in the Washington region last week appeared to be a maze of garden apartments tucked inside the beltway in Annandale, Va., where more than a thousand Hispanic residents live in apartments starting at $1,200 a month. Immigration attorneys said federal officers had staked out the Fairmont Gardens apartment complex at least twice last week, arresting men as they left for work Tuesday and Thursday morning.

"I fear we're going back to the bad days under [former President George W.] Bush - or worse - when immigration officers were given quotas for arrests and whether they found their person or not, they filled up the van to meet the quota," said Simon Sandoval-Moshenberg, legal director for the Legal Aid Justice Center's Immigrant Advocacy Program.

Virginia state Sen. Scott Surovell, D-Fairfax, held a town hall meeting Saturday morning in Mount Vernon where more than 200 constituents showed up. Surovell discussed pictures he'd been sent of federal immigration officers on Friday detaining a man about two miles away in the parking lot of an Aldi grocery store along Route 1.

He said he's heard that the surge in enforcement is scaring schoolchildren, who may avoid going to school on Monday. "They don't know if their parents are going to be taken away," he said.

Dozens of community organizers held a telephone conference Saturday afternoon to discuss strategy, with one lawyer saying in Spanish that immigrants need to take steps to protect themselves.

Promoted
Listen to the latest songs, only on JioSaavn.com
"Do not open the door to your home without seeing a warrant," he said. "Do not drive a car with broken lights, and do not drive at all at night."