Prime Minister Scott Morrison, who lobbied for his release from detention in Thailand, met him after the citizenship ceremony and handed him the Australian flag lapel pin from his jacket. 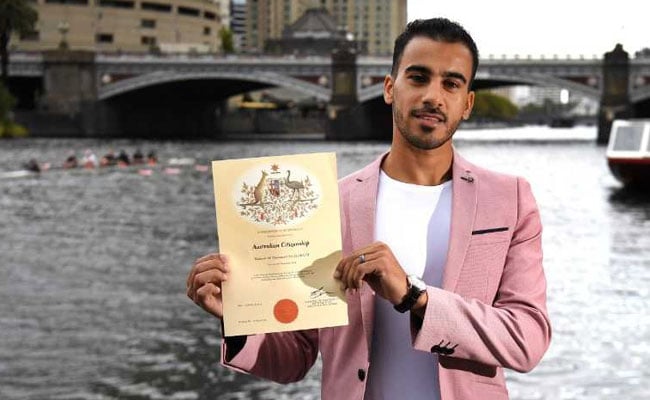 Hakeem Al Araibi left Bahrain after he was accused of crimes committed during the Arab Spring protests.

A refugee footballer who fled Bahrain and was held in a Thai prison for months during a tense extradition stand-off between Australia and the Gulf state was granted Australian citizenship on Tuesday.

Hakeem Al Araibi, 25, left Bahrain in 2014 after he was accused of crimes committed during the Arab Spring protests of 2011, which he denied. He was granted refugee status in Australia but after an Interpol notice requesting his arrest was made by Bahrain, he was apprehended by Thai authorities in November when he flew to Bangkok for a honeymoon.

"I'm an Aussie now," he told reporters in Melbourne after a citizenship ceremony on the banks of the Yarra River that flows through the city.

Prime Minister Scott Morrison, who lobbied for his release from detention in Thailand, met Araibi after the citizenship ceremony and handed him the Australian flag lapel pin from his jacket.

"I think this is a tremendous day that we welcome you, absolutely, into the Australian family."

Hundreds of supporters cheered "Welcome home, Hakeem!" when he arrived at Melbourne's airport following his release from jail in Bangkok a month ago.

He was among more than 200 people from 44 countries who, having passed a citizenship exam, pledged loyalty to Australia and were granted citizenship at the ceremony, the Australian Associated Press reported.

Pascoe Vale, the semi-professional team he plays for in Melbourne, congratulated Araibi.

"A moment we all have been waiting for," the club said on Twitter.

"Finally, no country can follow me now because I am Australian," Araibi told the Guardian newspaper.

"Bahrain, please don't follow me. I am now 100 percent safe in this country."