Ukaine's President Volodymyr Zelensky grew up as a native Russian speaker but can also fluently speak English and Ukrainian. 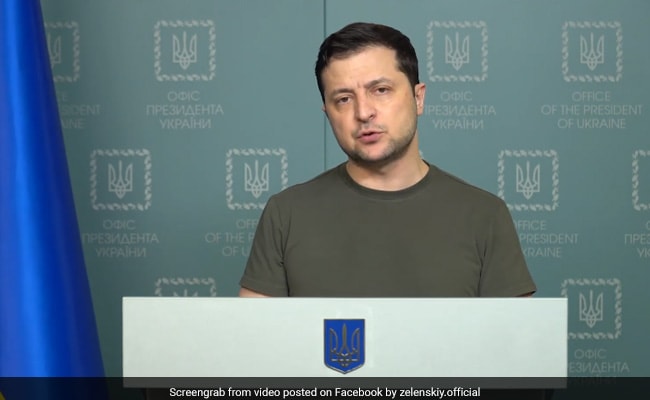 As soldiers in Ukraine battle the superior Russian forces, President Volodymyr Zelensky is being hailed for rallying the entire country, posting video messages in defiance of Russian aggression.

An old clip of Zelensky has now gone viral in which he is seen performing on the stage of ‘Dancing with the Stars' in 2006. He won the show that year and his dancing moves are now winning the internet.

so apparently Zelenskyy won the Ukrainian version of Dancing with the Stars in 2006 and the tape is even better than whatever you're imagining pic.twitter.com/L1gnKD2ISr

The video clip has been viewed more than one million times since it appeared online. “Seriously, is there anything this guy can't do?” a Twitter user said.

Another clip from his hit television series Servant of the People is also making the rounds on the internet in which Zelensky played the role of a school teacher. In the clip from the political satire, Zelensky's character Vasyl Petrovych Holoborodko is seen launching a tirade against government corruption and soon finds himself sitting in the President's seat.

???????? Servant of the People is a Ukrainian political satire comedy television series created and produced by Volodymyr Zelenskyy, who stars as Vasyl Petrovych Holoborodko, a high-school history teacher in his thirties who is unexpectedly elected President of Ukraine. #Zelenskyypic.twitter.com/haWQyplUJX

The users are linking this to his political debut in 2018 in which anti-corruption plank was his main focus. Zelensky formed an outfit named after his popular show, Servant of the People, in 2015. It was officially registered as a political party three years later.

In one of the episode of “Servant of The People” President Zelensky's character says “We can flee or we can stay and strike”. We are seeing this in real time now. Ukrainians are total badass ???????????????????? #Ukraine#Zelensky

Servant of the People is actually a great show. My first reaction to seeing Zelensky was "hold up that dude played the president on tv". Iconic of him actually. https://t.co/IYZKlJDR2y

In the 2019 election, Zelensky defeated billionaire and incumbent President Petro Poroshenko to occupy the top post.

He entered politics at a time when Russian-backed insurgency was raging in eastern Ukraine and corruption was at its peak. Zelensky was catapulted into fame but a video shot by a supporter where he blasted official corruption.

He was born to Jewish parents in the industrial city of Kryvyy Rih. Zelensky's family relocated to Mongolia for four years when he was a young boy but came back to Ukraine.

Zelensky grew up as a native Russian speaker but can also fluently speak English and Ukrainian.

He graduated with a law degree in the year 2000 from Kyiv National Economic University.

While still a student, he became active in theatre. In the years that followed, he also appeared in a number of feature films. Television and films were his main focus till mid-2010s.