Iceland is one of only three countries in the world to permit farmers to extract blood from pregnant mares at so-called blood farms. 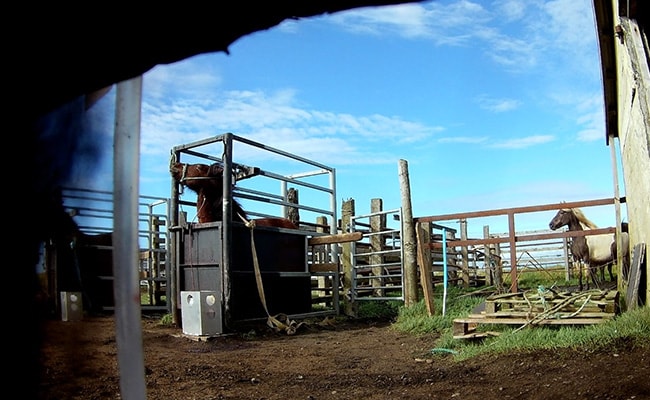 The authority said if violations are detected at an inspection, the practice is "immediately" halted.

Iceland have launched an enquiry after a shocking video emerged via animal welfare associations  showing maltreatment of horses.

Iceland is one of only three countries in the world to permit farmers to extract blood from pregnant mares at so-called blood farms.

In a statement, the Icelandic veterinary authorities said the practices shown in the video appeared to be at odds with the animals' welfare and added they were taking the affair "very seriously".

The organisations have, along with a coalition of international animal welfare organisations, urged the EU Commission to ban the importation and production of the hormone, PMSG (Pregnant mare serum gonadotropin).

The associations noted the European Parliament recently made a similar demand.

The video, entitled "Iceland, land of the 5,000 blood mares," shows images taken between 2019 and this year, of the controversial blood extraction at some of the country's 119 blood farms.

Iceland is the only country in Europe to allow a practice which also occurs in Argentina and Uruguay.

The pharmaceutical industry uses the hormone to bolster fertility in cows, sheep and goats as well as pigs.

The practice is a growth industry in Iceland under biotech firm Isteka ehf, which uses the product.

On the site, the AWF says that "it is a business worth millions, which has delivered high profits for about 40 years."

But it added that research in Argentina and Uruguay suggests that "more than 10,000 mares are cruelly mistreated and exploited for the meat and dairy industries in Europe."

Furthermore, "because the hormone can only be obtained during early pregnancy, the foals are aborted so that the mares can be impregnated twice a year, further adding to their suffering.

"About 30 percent of mares drop out of the production system every year: they either die in the pastures or are sent to EU-approved slaughterhouses when they no longer get pregnant."

Iceland's veterinary authority says the practice was carried out on some 5,400 mares across the country this year, adding it visits some 40 percent of the farms annually.

The authority said if violations are detected at an inspection, the practice is "immediately" halted.

"In total, activities have been suspended at five farms since 2014," the authority said Monday.