"I Have Kids", US Police Officer Pleads For Life While Clinging To Car

The terrified pleas were played publicly in a Maryland courtroom Tuesday as a case against the driver drew to a close. 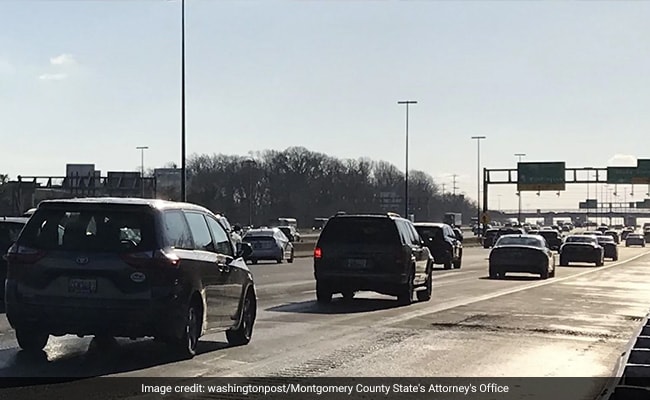 Montgomery County police officer was off-duty when he tried to stop hit-and-run suspect on Dec. 3, 2018

As he clung to the windshield of a car barreling at an estimated 80 mph on an interstate shoulder, police officer Chris Jordan's thoughts went to his children.

"Stop!" he screamed to the driver through the glass. "I have kids! I have kids!"

The terrified pleas - recorded during a 911 call from Jordan as he held on to a wiper blade and a small groove near the roofline - were played publicly in a Maryland courtroom Tuesday as a case against the driver, Denai Holly, drew to a close. She was sentenced to five years in prison for first-degree assault.

Holly, 26, in a tan jail jumpsuit, and Jordan, 37, in his dark-blue Montgomery County police uniform, spoke during the hour-long hearing that recapped the bizarre sequence last year during a traffic-clogged morning commute in the county.

As the car finally slowed, Jordan was able to push himself off.

"I have no malice in my heart," Jordan said, his voice halting. "I forgave her the second my feet hit the ground."

Holly apologized to him in court.

"I'm not going to stand here and act like I know how he felt, because I don't," said Holly, also pausing as emotion overcame her."I would have been scared to death as well."

On Dec. 3, 2018, Holly had finished her overnight shift at a U.S. Postal Service sorting facility in suburban Gaithersburg, Md., and was headed to her Washington home and her children, ages 1, 2 and 8.

Holly had worked small jobs before landing the postal facility position about three years ago. Her graveyard shift was set around her child-care routines: day care, help from an aunt, getting her oldest child to school.

On that morning, as Holly drove from Interstate 370 to I-270, she struck a car that then hit another.Holly drove off.

Behind her - and witness to the collisions - was Jordan, in his van and off-duty. He followed Holly's car, called 911 on his cellphone and spoke with a dispatcher from the Maryland State Police.

"Hey, this is an off-duty Montgomery County police officer," Jordan said. "You got a hit and run, gray Chevy Impala, southbound 270, approaching Shady Grove Road, in the far right lane . . ."

Jordan reported the Chevy's license plate number and watched as the car snarled in gridlocked traffic. He stepped from his van to walk to Holly's car.

"I'm a police officer, don't you move!" he yelled.

Holly panicked, locked her windows and accelerated, trapping the officer between her car and his van, according to court records.

"She's running me over," Jordan told the dispatcher.

Jordan tried to push away from the Impala but ended up falling across it - directly against the front windshield. Holly hit the gas, heading down the shoulder.

Through it all, Jordan kept a hold on his cellphone - clutched in the hand wrapped around the wiper blade as the 911 recording continued.

"Please stop! Please stop!" he screamed as Holly zoomed down the shoulder with Jordan against the windshield, between heavy traffic and a concrete road barrier that his feet grazed several times.

"I have kids!" he repeated over and over.

In court, Holly's attorney Bernard Grimm said his client, who has been locked up since her arrest last year, had long harbored "severe anger issues" dating from the loss of her parents when she was 6. That morning on I-270, he added, Holly thought Jordan, in plainclothes, was perhaps a driver from the car she had hit, and she panicked.

Grimm questioned whether Holly reached 80 mph with Jordan atop the car but acknowledged that Jordan had every right to feel terrified.

"You know it's dangerous, and there's no doubt about that," Grimm said, "because if he falls off into traffic, he's going get run over. If he falls off off-traffic, his head is probably going to bounce off the Jersey barrier, and he's going to be dead. . . . He believed his life was over."

After traveling about a mile, Holly eased up on her speed.

"I don't know why Ms. Holly decided to change her course and slow down enough for me to feel comfortable dismounting from her vehicle," Jordan said in court. "But she did. And I will thank her every day of my life for making that decision. I can only hope that it was her children that was going through her mind. And it pains me to know that she has not seen her children in a year."

Seated 10 feet away in court, Holly buried her tear-streaked face in her hands. In the gallery, her family members cried, as did at least one of Jordan's fellow officers who had come to support him.

Grimm told Judge Julie Solt that Holly had led a crime-free but arduous life. She was raised by various relatives and gave birth to her first child as a teenager.

Jordan, whose children are 8 and 5, talked about the perspective he had gained in 13 years as a police officer and its views of the worst society can offer - killers, career criminals, the deaths of children.

"Ms. Holly is not the worst of society," he said. "She has proven that from a long life so far of not committing crime. Staying within the bounds - though having significant challenges in her life that are challenges that I will never know."

Holly's attorney had sought a shorter sentence, which would have enabled her to stay in the Montgomery County Correctional Facility - not state prison - and continue with the therapy her lawyer said has been helpful.

Assistant State's Attorney Peter Larson requested a six-year sentence, the longest available under a plea deal he struck with Grimm.

US police officercop begs for life