"What will I do with a school leaver's certificate if I don't have a country," one student told a Lebanese television. 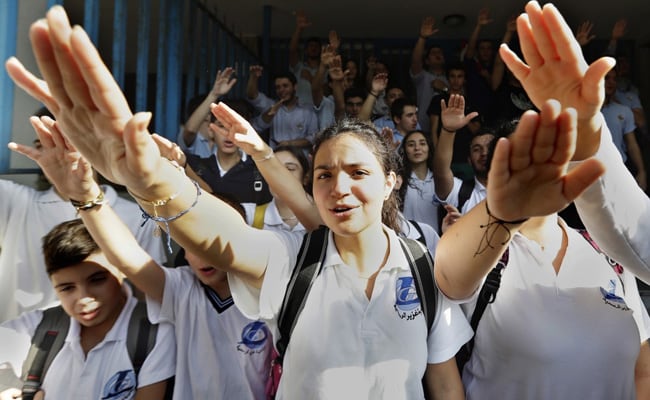 Hundreds of schoolchildren led anti-government demonstrations across Lebanon on Wednesday, refusing to return to class before the demands of a nearly three-week-old protest movement are met.

In the capital Beirut, dozens gathered in front of the education ministry, brandishing Lebanese flags and chanting slogans demanding the removal of a political class seen as incompetent and corrupt.

"What will I do with a school leaver's certificate if I don't have a country," one pupil told Lebanese television.

In a school in the resort town of Jounieh, just north of the capital, pupils mobilised against school governors accusing them of banning particpation in the protests.

Other pupil-led protests took place in the southern cities of Tyre and Nabatieh, the eastern city of Zahleh and the northern city of Byblos, according to NNA and other Lebanese media reports.

But demonstrators, who have kept up their protests since October 17, were not blocking key roads on Wednesday morning.

Banks were open and classes resumed at most schools after a two-week gap.

But demonstrators gathered around key state institutions for a second day in a row, in what appears to be a new tactic replacing road closures.

The most significant in the capital was around the Palace of Justice, where hundreds demanded an independent judiciary and an end to political interference, an AFP correspondent reported.

"We don't want judges who receive orders," read one placard held aloft by the crowd.

A smaller group of protesters gathered near the central bank, accusing it of aggravating the country's economic crisis.

Pressure from the street prompted Prime Minister Saad Hariri to resign last week. He remains in his post in a caretaker capacity while rival politicians haggle over the make-up of a new government.

The protesters have expressed mounting frustration with the slow pace of the coalition talks.

(Except for the headline, this story has not been edited by NDTV staff and is published from a syndicated feed.)
Comments
Anti-Government protests In LebanonStudents protests