Marching through the streets, the crowd of mostly younger people, lit fireworks during a march which an AFP correspondent at the scene described as mostly peaceful. 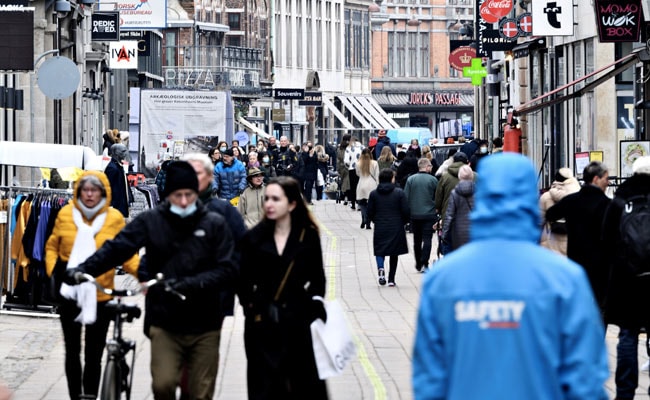 The Scandinavian country has been under a partial lockdown since late December. (Representational)

Hundreds gathered in central Copenhagen on Saturday to protest against a controversial virus law and Denmark's plan to create so called "corona passports".

Marching through the streets, the crowd of mostly younger people, lit fireworks during a march which an AFP correspondent at the scene described as mostly peaceful.

Police told the Ekstrabladet newspaper that some 600 people had gathered and one person was arrested for throwing firecrackers towards police officers.

Organised by Danish anti-restriction group "Men in Black," the main issue for the protesters was a new provision to the penal code that calls for a doubled sentence for a crime that "has a background in or is connected to the Covid-19 epidemic".

The first severe application of that law happened in mid-March, when a Danish court convicted a 30-year-old woman for statements and actions that contributed to a "gross disturbance of public order as well as the use of violence against police," at a January protest -- organised by the same group.

Her one-year prison sentence was converted to two years. The Saturday march stopped outside the prison where she is being held, with cries of "Free Nanna" outside the building which was heavily guarded by police vans.

The demonstrators, most dressed in all black, shouted "Freedom for Denmark" and "Mette Ciao" -- a reference to Prime Minister Mette Frederiksen -- as they made their way to a square in front of Copenhagen's city hall.

In addition to the doubling of sentences the protesters also object to the creation of "corona passports" -- a smartphone app which will be used to certify that someone has received a Covid-19 vaccine, tested negative within the last 72 hours or has recently recovered from Covid-19, conferring immunity to the disease.

Denmark's government has said the "corona passports" are a crucial part of the country's plan to reopen, but critics argue they will create a division in society.

The Scandinavian country has been under a partial lockdown since late December.

Primary schools reopened in February and secondary school student are due to return to classrooms in early April.

Most shops were allowed to reopen earlier this month.

However some businesses, including hairdressers, bars and restaurants, remain closed.

1 Arrested After Protest Outside Hindu Temple In UK