Humming "Despacito" In Saudi Heartland Where Music Was Taboo

Younger Saudis are a tech-savvy group that's been exposed to the rest of the world through the internet and travel, and wants to be part of it. 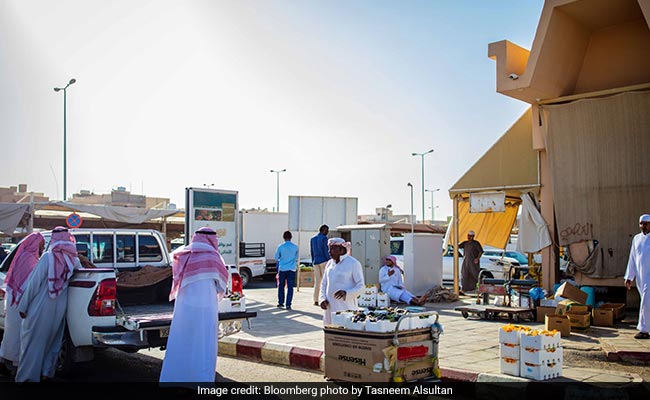 Traders sell their produce at a local farmers market in Buraidah, Saudi Arabia

The taxi driver's question was barely audible. Prodded to repeat it a few times, he mustered enough courage to raise his voice and ask if he could play music.

He sought permission because he was driving in Buraidah, the capital of Saudi Arabia's conservative heartland, where music is widely frowned upon as un-Islamic. That he dared to do so is a sign of the subtle liberalization taking root in Qassim province, a bastion of Islamic orthodoxy, years after the big cities of Riyadh and Jeddah embraced change.

To the strains of a Lebanese singer urging his lover to "Hug me tenderly," the taxi glided past restaurants and shops with sleek, modern exteriors and Western names like Meaty Buns and XOXO. Inside one of the cafes, Haifa Abdullah celebrated the newfound freedoms-as she sat swathed head-to-toe in black, her eyes peeking out from a veil.

"We're happy with this new openness and want more," said Abdullah, a 21-year-old university student who sat in the cafe with two women friends. She laughed when asked about Buraidah's reputation as an ultra-conservative city resistant to change.

"That was in the past. People's mindset is changing," she said. "They saw there were changes in Riyadh and Jeddah, that nothing happened to the girls and they're slowly coming around."

Demographic statistics help to explain this quiet evolution in the kingdom's most conservative region. Half of Qassim's population of 1.4 million are under 30. Their parents grew up at a time when the country's rigid doctrines were being enforced by the government, and their prime outlet to the outside world was satellite TV, which didn't arrive in the kingdom until the 1990s.

But younger Saudis are a tech-savvy group that's been exposed to the rest of the world through the internet and travel, and wants to be part of it.

"You call it openness? I want us to be normal," said Tamim al-Ayed, a barista at one of Buraidah's restaurants.

The Qassim region where his generation grew up gave the Arab world one of its oldest love stories: that of the pre-Islamic knight Antara ibn Shaddad and his love, Abla. Their "love stone," a rock 40-minute-drive from Buraidah, is one of the region's main attractions.

But Qassim also gave Saudi Arabia one of its most extremist figures, Juhayman al-Otaybi, who led the 1979 siege of the Grand Mosque in Mecca by Islamists seeking to shift the country to a more conservative course. The government responded by adopting a more austere interpretation of Wahhabi Islam that still prevails in Qassim, making the region an important testing ground for Crown Prince Mohammed bin Salman's drive to loosen social restrictions and return the country to moderate Islam.

The prince pushed the envelope further last week by announcing women will be allowed to travel abroad without permission from a male relative, a major step toward ending a controversial "guardianship" system that renders women legal dependents of men throughout their lives.

"The advancement of social reforms has shown that MBS' risky strategy of quick change has more support than traditionally assumed," said Ayham Kamel, head of Middle East and North Africa research at Eurasia Group, a consultancy. He wants to succeed in places like Qassim to "ensure that his program is a national program that changes society at large rather than creating limited pockets of openness."

One of these pockets is Riyadh. After the crown prince clipped the powers of the nation's religious police, who for decades had harassed women for showing a bit of hair and kept genders strictly separated, social codes suddenly softened.

Dots of color appeared on the streets as some women traded the black cloaks they're ordered to wear in public for bright greens, purples, reds and blues. Some women even wear their abayas open now, revealing jeans and colorful tops underneath. A few Saudi women have gone so far as to throw off their headscarves. Couples can even sit together in restaurants playing loud music.

In Buraidah, the changes are much more nuanced, and travel between the two cities offers stark evidence of the obstacles liberalization faces there. Almost all of the women on board a train were cloaked in black abayas and wore the niqab, a piece of black cloth that covers the face, leaving only a slit open for the eyes. A woman who didn't wear a niqab received a tongue-lashing at the airport by a man who told her she'd be damned.

Yet change is inching forward, mostly visible on the city's main thoroughfare, Al-Bukhary Boulevard, which is lined with trendy restaurants.

The thirst for a more open life is being slaked outside the main drag, too. At a date farm that's developed a side business by opening its doors to picnickers, Fatima Abdul-Aziz sat on a blanket with friends under a string of colored lights, savoring home-baked sweets as the sun set.

"There was a lack of entertainment options that were suitable for families," said Abdul-Aziz, a 42-year-old math teacher. "We'll stay until midnight. It's a safe place. My children can run around without my worrying about them."

But small as they may seem, these changes aren't going unchallenged.

At one restaurant, a diner stomped over to a group of three women and demanded they cover their heads, the manager said. He wouldn't leave them alone until they complied.

A woman in her 30s who identified herself only as Hussa said she worries that young women will cast off Islamic values with their veils.

"I'm very disturbed by the sight of young women who remove their niqabs in a restaurant, laugh loudly and then put on their niqabs before leaving for home," she said. "How can you do that?"

At the cafe where al-Ayed works, customers have accused management of promoting idolatry because of the decorative figures on display. Some men have hustled their families out after discovering there was no wall separating the single men's section from the staircase leading to the family seating area, he said.

"The ones you see here," he added, pointing to Saudis in the cafe, "make up the one third of Buraidah residents, tops, who want openness," al-Ayed said.

Prince Mohammed knows it will take a long time to neutralize the influence of religious and tribal establishments who oppose his agenda, said Kamran Bokhari, founding director at the Center for Global Policy in Washington. But it's happening, he said.

"In the short term, he's trying to secure whatever level of change he can get," Bokhari said. "But the question is what kind of backlash will he face? So far so good."

"Like An Underdog Going Through Training...": Signal On Resuming Service