How water on Red Planet dried up 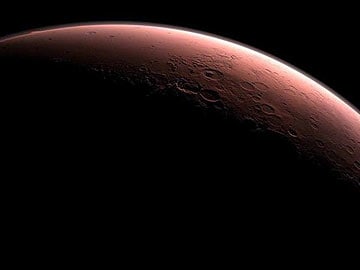 Paris: Cold and dry today, Mars was previously warm and wet but possibly only at intervals, a study published on Sunday suggests.

Scientists have long puzzled over what happened to the water, the precious stuff of life, on the Red Planet.

Unmanned spacecraft have sent home tantalising images of gouged canyons, valleys and sedimentary deltas, while landers have found hydrous rocks, all suggesting Mars at one time hosted hundreds of kilometres (miles) of rivers and lakes.

Today, though, Mars is too cold and the pressure of its carbon-dioxide atmosphere way too low for liquid H2O to exist. If you tried to pour water on its surface, it would simultaneously freeze and vaporise.

So when did Mars host liquid water? And what happened to it?

In a study published in the journal Nature Geoscience, planetary geologist Edwin Kite of the California Institute of Technology takes a new stab at the riddle.

Kite and his team measured craters, left on the Martian surface by asteroid collisions, to gain an idea of its past atmospheric pressure.

The principle behind their calculation is this: the thicker the atmosphere, the bigger the space rock has to be in order to survive the friction of contact with it.

Conversely, a thinner atmosphere means that smaller rocks are able to survive the descent and whack the surface.

Kite's team looked at 319 craters in Aeolis Dorsa, a 3.6-billion-year-old region that shows evidence of past rivers to get an indication.

They calculated that these craters were formed when Mars had atmospheric pressure of up to 0.9 bar.

This pressure is 150 times greater than that of today and intriguingly close to that of the water-rich Planet Earth at sea level.

The bad news, though, is that Mars is far more distant from the Sun than Earth and at that far-off time, our star was much less bright than now.

As a result, Mars would have required pressures of at least five bar for its surface to keep above the freezing point of water. It seems to have lacked a long-lasting thick atmosphere during its river period.

"If Mars did not have a stable multi-bar atmosphere at the time that the rivers were flowing - as suggested by our results - then a warm and wet CO2/H2O greenhouse is ruled out, and long-term average temperatures were most likely below freezing," said the study.

This throws up other possible explanations for the water, said Sanjoy Som of NASA Ames Research Center in a commentary published in the same journal.

One is that the water was high in acidity and salt content, giving it a lower freezing point and enabling it survive as a liquid in lower air pressure.

Another is that greenhouse gases from volcanic eruptions helped Mars, for a while, to have a denser atmosphere that enabled the water to flow.

Another possibility is "transient intervals" of denser atmosphere caused by the planet's tilt, said Som.

Promoted
Listen to the latest songs, only on JioSaavn.com
Like a child's top that is slightly off centre, Mars tilts slowly around its axis of spin.

It takes 120,000 years to complete one axial revolution, a timescale that leads to major changes in the amount of sunlight reaching its poles, whose water either froze to form ice-sheets or warmed to "reinflate" the atmosphere and form rivers that flowed at kinder times.

New Patagonian Dinosaur May Be Largest Yet: Scientists