How China Now Threatens One Of The World's Greatest Success Stories 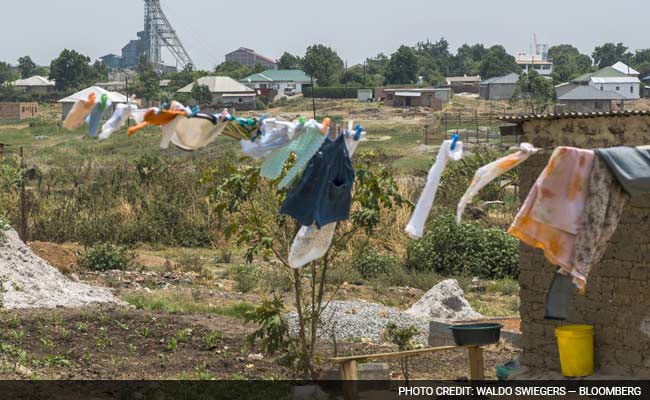 Clothes dry on a washing line outside workers' homes near the Mopani copper mine in Kitwe, Zambia.

Over the last 25 years, a period of remarkable economic growth spanning from China to South America spurred one of the world's greatest - and oft-overlooked - modern achievements: a dramatic reduction in the number of extreme poor. More than one billion were pulled out of the most destitute conditions, and the pace of improvement inspired such optimism that two years ago the United Nations vowed to eliminate extreme poverty entirely by 2030.

But now, China's downturn - and the related prospect of weaker growth across the world - is threatening to stall that progress, signaling a new era of dimmer prospects for the poorest of the poor. That is just one of the emerging challenges from a slowdown that has crippled some nations' currencies and wiped hundreds of billions from stock markets globally.

Economists caution that the rise or fall of poverty in the coming years depends on a number of hard-to-predict factors, including technology, disease, corruption, war, and climate change. But they also say with growing confidence that the job of fighting poverty is getting harder, particularly in Africa, a continent that is home to half the world's extreme poor and depends disproportionately on Chinese demand for raw materials.

"If the resource-rich African economies are hit hard, that poses a big challenge for the global poverty trajectory," said Laurence Chandy, a fellow in the Global Economy and Development program at the Brookings Institute.

For more than two decades, China served as the most potent anti-poverty weapon the world has ever known. Twenty five years of breakneck expansion brought hundreds of millions from farmland into cities. In 1990, 61 percent of Chinese lived on less than $1.25 per day, the global poverty line. Now, four percent of the country lives below the line. Of every five people in the world who escaped poverty during this span - a total of roughly 1.1 billion people - three were Chinese.

But as China grew and lifted its own out of poverty, it also lifted many other countries. China needed materials for its building boom, and that meant scouring oil, iron ore and coal from across the globe to feed its appetites. China turned with particular zeal toward Africa, and during the span of 10 years, its investment in the continent grew more than 26-fold. The relationship helped drive the narrative of an Africa emerging into prosperity after a 1990s marked by famine and genocide.

Economists now worry that Africa is in for a far more difficult future. International Monetary Fund chief economist Maury Obstfeld said recently that the spillovers from China "have been much larger than we would have anticipated." Sub-Saharan Africa just had its weakest year of growth this century, and credit ratings agencies have recently downgraded outlooks for several African nations.

The Chinese slowdown opens a potential opportunity for some countries - including Kenya and Ethiopia - that export goods that can be gobbled up by the rising Chinese middle class. But if Chinese growth overall continues to slow, sub-Saharan Africa figures to suffer, the World Bank says. China accounts for more than 40 percent of exports in more than a half-dozen African countries, including Zambia, Angola, and Sierra Leone.

"A lot of African countries that depend on trade with China...won't be able to provide essential services to the poor," said Andrew Dabalen, the lead economist in the World Bank's Poverty and Global Equity Practice. "There will be a lot of pressure and it might risk poverty becoming stagnant or even going up in some cases. That's a real risk."

The world's poor now live, primarily, in two places: India and sub-Saharan Africa. As of 2010, about 800 million people lived in extreme poverty in those two regions, split evenly between the two. But economists say India's fight against poverty, though massive in scale, appears to be going somewhat better: The nation managed to cut extreme poverty in half between 1990 and 2010 and has maintained its steady growth in recent years.

Sub-Saharan Africa is far more worrisome. Even during relatively strong economic times, it has struggled to curb poverty. Between 1990 and 2010, it reduced the proportion of those in the direst conditions by only 15 percent. Given the rapid population growth, the raw number living below $1.25 per day actual grew.

Dealing with poverty in enormous countries like China and India can be relatively straightforward, Chandy said. But sub-Saharan Africa is a patchwork of fragile states, and to achieve the U.N.'s zero-poverty goal, nearly every one of those governments would need simultaneous periods of peace, competent governance, and growth.

In a 2013 paper, Chandy tried to project the prospects for global poverty over the next generation. Under the best scenario, the extreme poverty rate by 2030 could hit 1.4 percent. Under the darkest scenario, poverty could remain nearly what it is now, at 15.2 percent.

"India is making faster progress than we maybe expected," Chandy said. "The whole fight is an Africa issue."

Over the last year-and-a-half, the price of oil has fallen more than 70 percent. The value of copper has been slashed by 40 percent. The price of iron ore has been cut in half. Though commodities prices are notoriously volatile, economists say that reduced Chinese demand could depress prices for raw materials for a sustained period - potentially for years.

Africa is enduring a direct hit from the commodities pain.

In copper-dependent Zambia, president Edgar Lungu several months ago tried to stave off panic over his country's own plummeting currency, but also said on his Facebook page that "people with brilliant ideas on how to salvage the economy should come on board," as the government is ready to listen. Zambia is dealing with prolonged power outages, and its largest mining company said last year that it would lay off 4,000 workers.

In Angola, sub-Saharan Africa's second-largest oil producer, it is the poor who are suffering the most, according to a lengthy article on the nation in Foreign Affairs. Cuts to fuel subsidies have caused in increase in bus fares and bungled garbage collection has left the capital, Luanda, in a layer on stench.

And in Nigeria, which depends on oil for roughly 75 percent of its government revenue, foreign exchange reserves have dwindled and its currency, the naira, is worth roughly 25 percent less than it was two years ago, relative to the dollar. "This has been a difficult period in our nation's history," said Nigerian president Muhammadu Buharia, whose government is also dealing with Boko Haram, a bloody insurgent group.

Though particular food and welfare policies can influence the fight against destitution, economists say that economic growth - if it out-paces population growth - typically indicates that people are being pulled out of poverty.

Nigeria has more extreme poor people than any country in Africa, and its population is growing at 2.7 percent annually.