Then, in May 2018, as other faculty members pitched in to administer his courses' final exams, Giuseppe Conte abruptly went on leave. 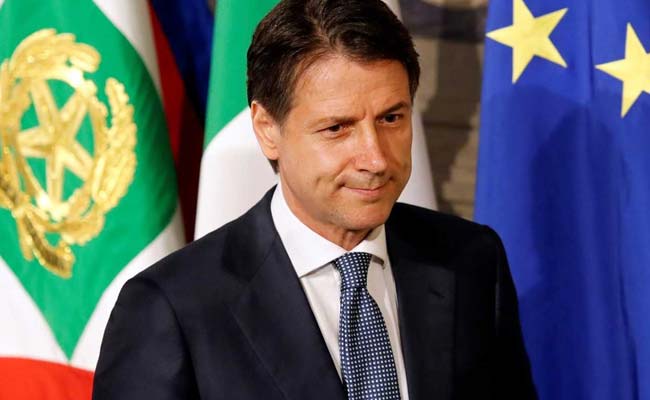 He was one of 90 people on staff at the university law school, with a reputation as being mild-mannered and formal. He showed up for work in well-designed suits with pocket squares. He taught two auditorium-size classes every semester.

Then, in May 2018, as other faculty members pitched in to administer his courses' final exams, Giuseppe Conte abruptly went on leave.

Conte's initial departure was surprising enough: He'd been pulled from the ranks of academia to become Italy's figurehead prime minister, a neutral - and intentionally obscure - arbiter for the two ambitious politicians joining their parties in a coalition.

But as that nationalist-populist coalition broke apart this summer, Conte's career has taken an even unlikelier turn. Rather than returning to the University of Florence, where his nameplate remains on his office door, Conte engineered a bid to stay on as prime minister and lead a new government that better fits his moderate political views - this time, while gaining broader power for himself.

"I think about where he was [15] months ago, and it is astonishing," said Patrizia Giunti, Conte's boss at the law school.

The government Italians are calling Conte II, sworn in Thursday morning at the presidential palace in Rome, was possible only because of Conte's transformation. After arriving in politics as a virtual unknown a little more than a year ago, Conte survived a topsy-turvy summer of backroom machinations, outmaneuvered powerful nationalist Matteo Salvini and emerged in the eyes of some Italians as a low-key, sober alternative to the boisterous personalities who have often dominated Italian politics.

Italian newspapers have noted another aspect of Conte's political transformation: Initially the nominal head of a government dominated by the far right, he'll now lead a coalition - between the Five Star Movement and the Democratic Party - that is likely to skew more to the left.

"I can imagine that everybody is a bit tired" of combative politics, said Cristina Fasone, a member of the political science department at Luiss Guido Carli University in Rome. "The personality of Conte is seen as one of a person who is moderate, who tries to reach compromise."

Conte, 55, is hardly guaranteed a long shelf life. Salvini's far-right League, which is now in the opposition, remains the country's most popular party. The new coalition, which must be confirmed by a vote in Parliament next week, is a combustible union of two parties that have long been vicious rivals. If the coalition is short-lived, new elections could vault Salvini into the prime minister's job.

Meantime, Conte has developed his own base of supporters. He often was depicted as subservient to Salvini and Five Star Movement chief Luigi Di Maio, his deputy prime ministers in the prior government; now, polls show that he is more trusted than both of them. In the new government, Conte will not have deputies at his flanks.

President Donald Trump, widely critical of most Western European leaders, recently called Conte a "very talented man" - although it is unclear how much of Trump's admiration stems from the Salvini-led anti-migrant policies of the last government.

At home, part of Conte's cross-party appeal, analysts say, is his inoffensiveness. His social media feed is a throwback: short on opinion, rich with carefully worded diplomacy. He speaks rarely about his personal life (he is divorced, with one child).

More recently, though, Conte has also picked times to speak forcefully - to his political benefit. When Salvini broke apart the coalition of his anti-migrant League and Di Maio's anti-establishment Five Star Movement early last month, in a bid to force new elections and become prime minister, Conte delivered a viral speech in the Senate in which he upbraided Salvini for "political opportunism," calling him the "interior minister," as if to emphasize his place in the pecking order.

"Let me say that the interior minister has shown that he is following his own interests and those of his party," Conte said to applause as Salvini, seated next to him, shook his head.

Rather than face a no-confidence vote, Conte stepped down - but not before delivering a pro-European appeal that sounded like an audition for the next government.

One of Conte's friends, Ettore Maria Lombardi, said that Conte has shed the "awkwardness" that was evident when he first became prime minister. Lombardi recalled speaking to Conte after a June 2018 Group of Seven meeting, where Conte met Trump, German Chancellor Angela Merkel and French President Emmanuel Macron.

"How had it felt?" he recalled asking.

"It was a difficult time, but I had to put on a statesman's clothes, because it had to be done," he recalled Conte saying.

Lombardi, a lawyer and a former student of Conte's, said that he more resembles a natural politician now.

"Of course his acquired nature as an attorney and an academic will remain, but there's a drift toward another mind-set," Lombardi said. "I've been noticing it for a while now - a professionalization, a greater understanding of the dynamics."

While working at the University of Florence, Conte did not speak much about politics, Giunti said. But it was there that he developed the connection that would serve as his springboard.

Alfonso Bonafede had studied law at the University of Florence, also serving as a student assistant to Conte, and later rose through the ranks of the Five Star Movement. When the Five Stars were discussing potential ministers, Bonafede floated Conte's name. The initial idea was that Conte would be given the task of clearing the country's red tape and bureaucracy. But as the Five Stars hashed out a coalition with the League, Conte's role expanded.

"A lawyer for the people," Conte said in one of his first speeches to Italians.

In recent weeks, as the new government has taken form, Salvini has trained his ire on Conte, describing him as a sellout who has lost any populist credibility. "Lawyer for the elites," Salvini wrote on Facebook, sharing a photo of Conte and Merkel.

The Conte II government, according to initial indications, may loosen some of Salvini's most assertive anti-migrant policies while working to patch up a relationship with the European Union that frayed during a year of populist pushback in Rome.

The new government is expected to nominate Paolo Gentiloni, a former Democratic Party prime minister, as European commissioner, in an initial conciliatory move, according to Italian media reports.

"Italy is returning to be a protagonist on the world stage," Conte said this week.

Traditionally, when Italy changes governments, the outgoing prime minister hands a bell to the new prime minister, in a passing-of-the-baton ceremony. But Thursday, with Conte succeeding himself, a clerk simply handed the bell to Conte, who held it for a photo op. One newspaper, Il Fatto Quotidiano, used its front page Thursday for a photo illustration depicting the scenario in more dramatic terms. The image showed two Contes - Conte I handing the bell to Conte II.

At the bottom of the page, a downtrodden Salvini was shown slinking off to the sidelines.

The headline carried a message for the outgoing interior minister: "Big kisses from Palazzo Chigi," the prime minister's residence.