Gavin Grimm's fight against his school became a flash point in the fight for transgender student rights. 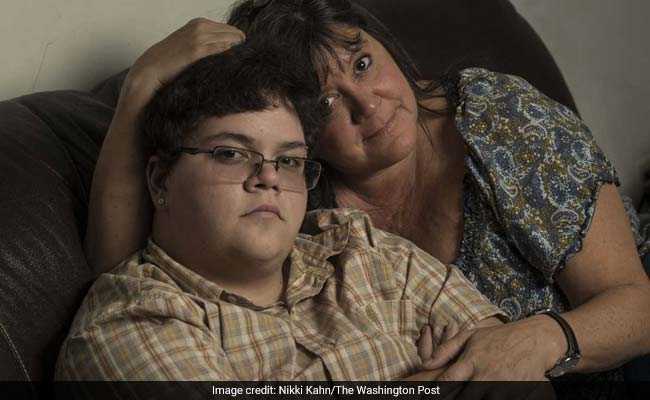 Gavin Grimm accused his school of choosing to prolong the suffering of trans youth.

Gavin Grimm was a sophomore in high school when he was barred from using the boys' restroom because he's transgender. He sued, and a protracted legal fight that ascended to the Supreme Court turned the teenager into a national cause celebre.

The same Virginia school system that fought to keep Grimm out of the restroom that fits his gender identity recently considered reversing the rule.

But a public hearing on Tuesday revealed the deep divide that persists in Gloucester. Some in this Chesapeake Bay community maintain that lifting the rule is a step toward equality for transgender students. Some argue that such a move would violate other students' privacy and defy Christian ideals.

In the end, the Gloucester County School Board decided on Thursday that it would sit tight, issuing a news release saying it has not "set a time frame for when any action will be taken or when any further discussion will be held."

So the battle continues, and the courtroom is the most likely venue for resolving a case that became a flash point in the fight for transgender student rights.

Reacting to the decision, Grimm, who is studying in California to become a middle school teacher, accused the school board of "choosing to prolong the suffering of trans youth." He addressed the board during the public hearing, arguing that relegating students to restrooms corresponding with the sex they were assigned at birth, or to separate restrooms, is "exclusively malicious."

"Anything less than full and equal access is a disservice and an insult," Grimm said during the hearing. "The transgender community faces a lot of hatred and danger for the mere crime of existing. Do we want our schools to be such a strong perpetrator of that hatred?"

Dozens of community members, many appearing to support the school system's current bathroom rules, filled the government auditorium in which the meeting was held.

John Pouchot, a pastor at Petsworth Baptist Church, said the policy, which allows transgender students to use private restrooms, respects all students.

"The public school is not created as a place for society to work out its cultural, moral and social issues," he said after the hearing. "The present policy . . . creates a safe place for [transgender students] and my 16-year-old daughter."

Kenny Smith waved a Bible at the podium and called on school board members to let "godly principles," not culture, "define our morals."

Many in the room rose from the auditorium seats and applauded after Smith spoke.

Applause also followed Deirdre Grimm, who sat with her son Gavin and representatives of the American Civil Liberties Union, when she reflected on Gavin's fight.

"While your children were going to prom and doing their sports that they enjoy, my child was fighting for his life and for his right to use a bathroom," she said. "I'm a Christian, and I believe in God. And I believe God gave me this kid to open my heart and my mind and to help me open people's hearts and minds."

Lindsay Fogarty - a former student at Gloucester High, the school Gavin Grimm attended - recited a list of other challenges she thought the school system should focus on: lagging reading and math scores, dropout rates among boys and crime in schools.

"We are talking about where children use the bathroom. This shouldn't be an issue," Fogarty said. "This should be a basic right."

The school board in 2014 mandated that students use restrooms according to their "biological genders."

Grimm, now 19, said the ban violated Title IX, which prohibits discrimination on the basis of sex in public schools, and the 14th Amendment's equal-protection clause.

His case became a testing ground.

The school system, about 60 miles east of Richmond, appealed to the Supreme Court, which was scheduled to hear the case in spring 2017. But the justices returned the case to a lower federal court after the Trump administration reversed Obama-era guidance that directed schools to allow students to use restrooms that aligned with their gender identity.

The U.S. District Court for the Eastern District of Virginia, the lower federal court, declined to dismiss Grimm's lawsuit in May. Judge Arenda Wright Allen reasoned that the school board violated Grimm's rights by passing a policy that forced students to use bathrooms that matched their "biological sex."

The possible end of the bathroom rule was brokered between attorneys for Grimm and the school system as they tried to resolve the lawsuit.

The policy floated by the school system would have allowed students to use restrooms based on their gender identity if they met certain conditions, including providing documentation from a health-care provider who works with people who identify as transgender. The proposed policy also would have required that students be undergoing treatment recommended by a health-care provider, such as hormone therapy, and "consistently assert" their gender identity for at least six months.

Gloucester School Board Chairman William "Jarret" Lee did not say much on Tuesday, except to outline the parameters of the meeting and to emphasize that the board wanted to hear public opinion before making a decision.

Joshua Block, a senior attorney with the ACLU who is representing Grimm, said the school board's news release saying it was not acting to reverse the bathroom rule means that a federal judge will probably decide during a July trial whether the system discriminated against Grimm. A decision could come even sooner, Block said.

"We will continue to move forward with the lawsuit, and we are confident that Gavin will ultimately prevail," Block said. "The federal courts are there to protect individuals from discrimination when politicians refuse to do so."