How A Refugee Footballer's Honeymoon Turned Into An Extradition Nightmare

As the 25-year-old, who has refugee status in Australia, got off a plane in Bangkok on Nov. 27, Thai immigration police were waiting to arrest him based on an Interpol "red notice" from Bahrain. 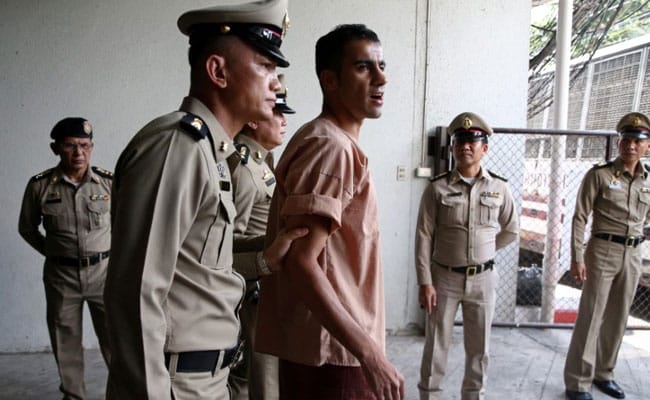 Hakeem al Araibi fled Bahrain in 2014 after being accused of vandalism during 2011 Arab Spring protests.

The honeymoon that Bahraini footballer Hakeem Al Araibi and his wife had hoped to have in Thailand late last year did not go according to plan.

As the 25-year-old, who has refugee status in Australia, got off a plane in Bangkok on Nov. 27, Thai immigration police were waiting to arrest him based on an Interpol "red notice" from Bahrain.

What followed was more than two months of diplomatic wrangling and intense scrutiny from global rights and sports organisations as they lobbied for Araibi's release from a prison in Bangkok, where he awaited possible extradition to the Gulf country.

Araibi fled Bahrain in 2014 after being accused of vandalism during the 2011 Arab Spring protests and sentenced in absentia to 10 years in prison.

He denies the charges and has lived as a refugee in Australia ever since.

The Middle East nation calls him a fugitive; Araibi said he would be tortured if he were sent back there.

"It was a big surprise when I arrived at Bangkok airport," Araibi told Reuters.

Araibi had contacted Australia's Home Affairs department, the agency responsible for his refugee status, before his honeymoon and was assured that it was safe to travel, said Fatima Yazbek, a rights activist who has been in close touch with the couple.

But as the couple's flight took off from Melbourne, where Araibi plays for the Pascoe Vale football club, an Interpol notification went out alerting both Bahrain and Thailand of his movements.

Thai authorities say they acted on the alert from Interpol Australia and an extradition request hours later by Bahrain, which had put out the red notice weeks before on Nov. 8 - the same day the couple was granted Thai visas from the embassy in Australia.

"The authorities knew his seat number and had a copy of the (Bahraini) passport that he had had when he was 16 years old," Phil Robertson of Human Rights Watch said.

It was not immediately clear why Araibi's refugee status, which should have prevented an Interpol red notice, was not flagged when the travel notification went out. Activist Yazbek says it was a lack of coordination among Australian agencies.

Australia's embassy in Bangkok said it was "not initially aware" that a red notice had been issued despite Araibi's status as a protected refugee.

"When the Australian Government became aware of the situation, we ensured the red notice was rescinded as soon as possible," the embassy said in a statement.

That took three days, during which Araibi remained detained. By Nov. 30, the Interpol red notice had been lifted and the footballer was told he could soon leave Bangkok.

But the delay proved costly. By the time the red notice was lifted, Bahraini authorities had contacted Thailand, asking for his detention and eventual extradition.

Araibi was detained throughout the weeks-long process, which saw him appear in court on Feb. 4 with his bare feet in shackles as he begged authorities not to send him to Bahrain.

The case drew international criticism and a public campaign to free Araibi gained momentum, spearheaded in Australia by footballers and rights activists.

"The photos of footballer Hakeem in leg irons at the court prompted a huge, spontaneous upsurge of global revulsion in social media, making it quite clear to Thai policymakers that the global campaign would grow and intensify if they continued with the extradition process to Bahrain," Robertson said.

On Monday, the Thai attorney general's office suddenly said it was dropping the extradition case after Bahrain abandoned its request.

It was not clear when or why the Gulf kingdom changed its mind. The move came on the heels of a meeting between Thai Foreign Minister Don Pramudwinai and Bahrain Crown Prince Salman bin Hamad al Khalifa on Sunday in Manama, though the agenda of that meeting was not disclosed.

Bahrain's foreign ministry said the 10-year jail sentence imposed on Araibi remained in place and reaffirmed its right to "pursue all necessary legal actions against him."

Within hours of Thailand's decision, Araibi boarded a plane back to Melbourne, where he was welcomed by hundreds of supporters on Tuesday.

Araibi said the trip to Thailand was the first time he and his wife, who is also Bahraini, had travelled out of Australia together. She does not face any legal issues in her home country and is a university student in Australia, he said.

(This story has not been edited by NDTV staff and is auto-generated from a syndicated feed.)
Comments
BahrainAustraliaHakeem Al Araibi