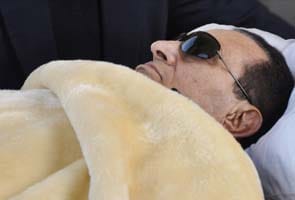 The 85-year-old former president, whose 30 years in power were ended by a popular uprising in early 2011, sat impassively in a wheelchair in the caged dock, along with his two sons and other accused, as the judge granted defence counsel an adjournment to July 6 to review the new materials.

Promoted
Listen to the latest songs, only on JioSaavn.com
Given a life sentence in June for failing to prevent the killing of more than 800 protesters, Mubarak had his conviction overturned on appeal, on the grounds of weakness in the original evidence. The retrial began a month ago. Dressed in a white gown and top and wearing familiar dark glasses, he looked alert on Monday but spoke only to say "Present" when his name was called.

In the televised third hearing in the case, the judge oversaw the unsealing of boxes of documents and other evidence relating to the security forces' crackdown, which focused on tens of thousands of people who gathered in Cairo's central Tahrir Square demanding an end to 60 years of military rule.
© Thomson Reuters 2013