Two Taiwanese men, linked to an organized crime group which supports closer ties between self-ruled Taiwan and China, were arrested immediately after the attack. 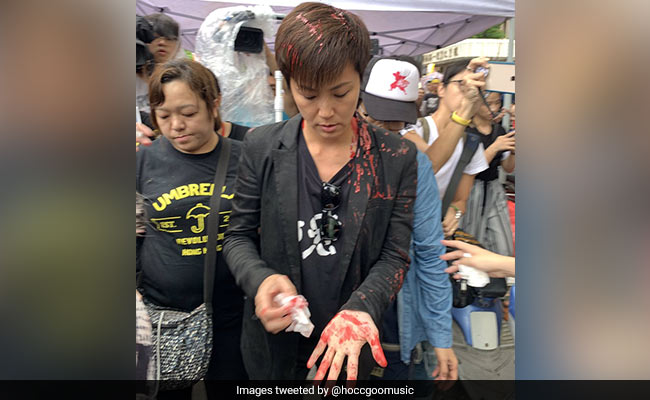 Hong Kong singer and activist Denise Ho was attacked on Sunday by a masked man who threw red paint at her at a rally in Taiwan held in support of anti-government protests in Hong Kong.

Ho, who earlier this month urged members of the U.S. Congress to pass legislation to combat human rights abuses in Hong Kong, was talking to reporters at the Taipei rally when the man ran up to her and poured red paint over her head.

Two Taiwanese men were arrested immediately after the attack, the island's Crime Investigation Bureau said, adding that the pair were linked to an organized crime group which supports closer ties between self-ruled Taiwan and China.

Organizers said around 100,000 people attended the Taipei rally to support the anti-government protests in Hong Kong, part of a global "anti-totalitarianism" rally ahead of the 70th anniversary of the founding of Communist China on Oct. 1.

"A lot of social activists in Hong Kong are actually subjected to situations like this every day. I think this is very obviously a sort of suppression and intimidation," Ho told reporters after being hit by the paint.

"I think that Hong Kong people will not back down or be scared by situations like this," she said, calling the incident "an attack on free speech".

Hundreds of thousands of people have taken to the streets of Chinese-ruled Hong Kong since mid-June in protests denouncing what they perceive as creeping interference by Beijing, a charge China denies. Sunday saw some of the most violent clashes since the protests began, with Hong Kong police firing water cannon, rubber bullets and rounds of tear gas at petrol bomb-throwing protesters.

Taiwan President Tsai Ing-wen said Ho's attackers "will be harshly punished" according to law and that Taiwan will not tolerate violence.

"Please take our will and determination to protect Taiwan's democracy seriously," Tsai said in a post on Facebook. "This is the land of freedom and civilization, not the territory of rampant totalitarianism. Don't try to challenge Taiwan's democracy and rule of law."

People in Taiwan have been closely watching Hong Kong and many have become increasingly wary of Beijing's "reunification" agenda for Taiwan.

China considers democratic Taiwan a breakaway province to be taken under its control, by force if necessary, and has suggested an arrangement similar to Hong Kong's "one country, two systems" formula guaranteeing certain freedoms.

Thousands of people from Hong Kong have left for Taiwan in recent years, citing fears of Chinese erosion of the city's freedoms.

Commenting on Sunday's protests around the globe, Tsai said many were rallying for freedom and democracy. "Everyone's heart is with Hong Kong."