The territory has been battered by more than four months of pro-democracy protests -- and increasingly violent clashes with the police -- with Beijing-backed Chief Executive Carrie Lam unable to resolve the unprecedented crisis. 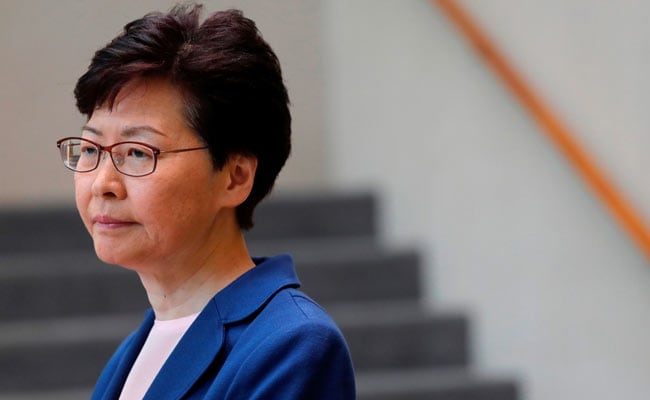 Hong Kong's leader on Tuesday hit back at a US senator who said the city is becoming a police state, a day after a massive rally called on Washington to punish Beijing over sliding freedoms in the international hub.

The territory has been battered by more than four months of pro-democracy protests -- and increasingly violent clashes with the police -- with Beijing-backed Chief Executive Carrie Lam unable to resolve the unprecedented crisis.

Critics have accused her government and the police of heavyhandedness, and some US lawmakers -- including Senator Josh Hawley -- are trying to pass legislation that would make Hong Kong's special trading status subject to annual reviews of its political situation.

"Some foreign politicians... still think this is a peaceful protest that fights for human rights and freedom, or even said they have not seen any violence," Lam said at a press conference.

"This is total ignorance of the truth."

Hawley, a sponsor of the Hong Kong Human Rights and Democracy Act, had said during a weekend visit to the city that it was "in danger of sliding towards a police state".

Lam said the American lawmakers had "preconceived views" about Hong Kong, and Hawley describing "Hong Kong as becoming a police state is totally irresponsible and unfounded".

The Missouri senator stood by his statement.

"I chose the words 'police state' purposely -- because that is exactly what Hong Kong is becoming. I saw it myself," Hawley tweeted.

The Hong Kong protests were sparked by opposition to a now-scrapped proposal by Lam's government that would have allowed extraditions to the mainland, but have since transformed into a wider movement for democratic reform -- including universal suffrage -- and police accountability.

The semi-autonomous hub enjoys freedoms under the terms of its 1997 handover to China by Britain that critics say are being eroded because of Beijing's tightening grip on the city.

While the demonstrations have largely been peaceful, there have been increasingly violent and frequent clashes between the police and hardcore protesters.

Protesters have accused the police of brutality and excessive tactics, while authorities say they are acting lawfully in a bid to end violence by demonstrators -- who have vandalised infrastructure like subway stations and businesses perceived to be pro-Beijing.

(Except for the headline, this story has not been edited by NDTV staff and is published from a syndicated feed.)
Comments
Hong KongBeijing