The Korea Football Association said it had taken steps to ensure there were no banners bearing political messages at the Busan Asiad Stadium. 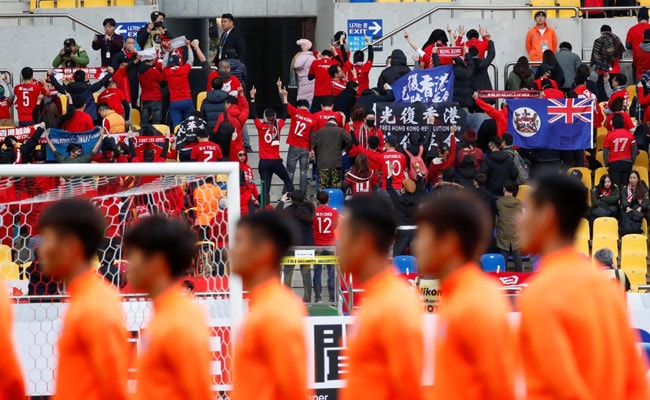 After the game, Hong Kong fans sang "Glory to Hong Kong" which has now become rallying cry for democracy

Hong Kong football fans booed as the Chinese national anthem was played on Wednesday before their team's clash with China in South Korea as the political turmoil that has gripped the former British colony spilled over to the sports world.

The Korea Football Association said it had taken steps to ensure there were no banners bearing political messages at the Busan Asiad Stadium, where nearly 200 Hong Kong fans chanted and banged drums to drown out a tiny pocket of Chinese supporters.

Hong Kong has been rocked by six months of sometimes violent demonstrations, with protesters angered by what they see as Beijing's stifling of freedoms despite a "one country, two systems" promise of autonomy when the city returned to Chinese rule in 1997.

China rejects the suggestion it is interfering in Hong Kong, and blames Western countries for inciting the trouble.

Disrespecting the national anthem is a crime in China. Hong Kong has presented a bill that sets jail terms of up to three years for the same offence, a move critics say raises fresh fears over freedom of expression.

Hong Kong, designated the home side for Wednesday's match in the four-team tournament that also includes hosts South Korea and Japan, were dressed all in red and turned to face their bauhinia flag when the national anthem began.

The Chinese players, dressed in yellow, faced their flag and belted out the anthem as it was being played, while boos rang out from the Hong Kong fans.

After the game ended, the Hong Kong fans sang "Glory to Hong Kong," a song that has become a rallying cry for democracy.

Television coverage of the match in Hong Kong did not show the anthem being played, instead cutting in as the players were shaking hands.

Chinese fans tried make themselves heard in the cavernous 50,000-seater stadium as Hong Kong supporters chanted: "We are Hong Kong" throughout the match.

University student Ben Wan, 21, said he flew in to watch the tournament and said the match had taken on a different edge due to the unrest back home in Hong Kong.

Wan, who was wearing a black mask, said: "I think the games against China are much more important than the previous because ... in Hong Kong there is political cleavage, it is becoming more and more serious."

Chinese fan Zhang Hui said he flew in just for this game.

"This particular competition, we think it's between two Chinese teams, one country two systems, go China!" said the 37-year-old.

"I'm a bit disappointed about the score because we lost but the team performance was I think was good," a man who gave his surname as So said. "...I've quite enjoyed the match because we got many friends here."

(Except for the headline, this story has not been edited by NDTV staff and is published from a syndicated feed.)
Comments
Hong KongSoccerChina National Anthem