Anti-government protesters brought chaos to Hong Kong's airport for a second consecutive day Tuesday, forcing airlines to suspend check-in for departing flights, as demonstrators extended their standoff with authorities who have been unable to quell months of dissent.

After mass cancellations the previous evening, flights had been gradually returning to normal throughout Tuesday, even as thousands of black-clad demonstrators returned to occupy the terminal with placards denouncing police brutality and calling for freedom for Hong Kong.

But by late afternoon, with protesters using luggage carts as makeshift barricades and blocking passengers from reaching the departure gates, causing long lines, airport authorities said they were suspending check-in at both terminals.

Arguments erupted between frustrated passengers and protesters, with some stranded passengers crying and saying they just wanted to get home.

Pavol Cacara, a Slovakian machinery importer who faced off with protesters, said his flight to Istanbul was canceled once already. 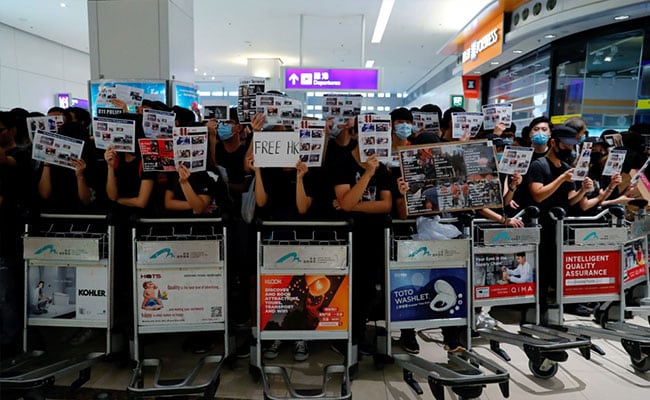 Arguments broke out between frustrated passengers and protesters. (Reuters)

"You cannot make freedom by taking freedom from others!" he bellowed, shaking with rage, at a mass of young demonstrators in black T-shirts. "This is what the Chinese want you to do, to make you lose support of the world. You are helping them!"

Tensions soared. As Cacara fumed, some protesters tried to calm him down and offered to help him find alternate flights while others pleaded with him to see Hong Kong's plight. "You don't die if you leave! We will die here!" called a voice in the rear.

After a 20-minute standoff, protesters parted to form a narrow channel to let a few passengers through. "Thank you for understanding. Please tell the world!" one yelled after Cacara.

Meanwhile, some protesters chanted "return the eye" - a reference to an incident Sunday night when a young woman was shot in the eye, possibly by a bean bag round, during a clash between police and protesters. Senior officers said Tuesday they were unsure how the woman was injured but could not promise that she would not be charged with rioting.

Police said they were closely monitoring the situation at the airport, working with airport authorities, and would carefully consider the need to use force.

As the summer of unrest rolls on, the situation is becoming increasingly tense. Statements from Chinese government officials and state media have grown steadily more shrill, accusing protesters of "terrorism" and warning of an impending crackdown in the semiautonomous financial center.

The political crisis, triggered by now-suspended plans to allow extraditions to mainland China, has swollen as Hong Kongers demand the bill's full withdrawal, an independent inquiry into police actions toward protesters, greater democracy and an amnesty for those arrested in clashes between demonstrators and police. 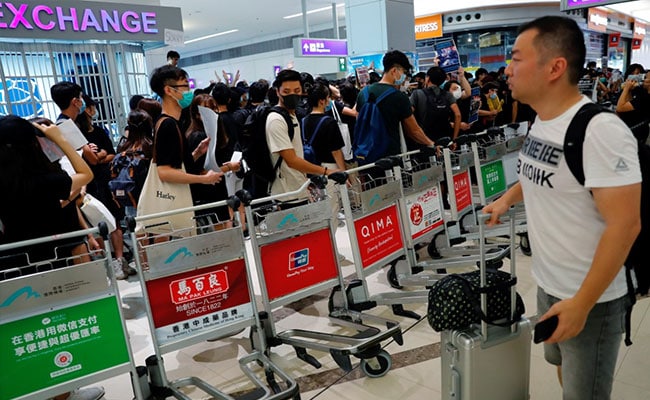 After a 20-minute standoff, protesters parted to form a narrow channel to let a few passengers through. (Reuters)

The upheaval has come at a politically sensitive time for Chinese leader Xi Jinping, ahead of the 70th anniversary of the founding of the People's Republic of China, which the ruling Communist Party plans to mark with a military parade in October.

Hong Kong-based airline Cathay Pacific, which has drawn the ire of Beijing after some of its staff recently joined protests, said Tuesday that a second pilot from the airline has been suspended. The pilot, a second officer working on a flight Tuesday from Manchester to Hong Kong, was suspended for "misuse of company information in violation of the company's internal code of conduct," the company said in a statement. It added that internal disciplinary proceedings were underway.

On Saturday, Hong Kong's flagship airline said it had suspended a pilot who was arrested during earlier protests.

International calls grew, meanwhile, for authorities in Hong Kong and China to dial back tensions in the city.

U.N. human rights chief Michelle Bachelet urged authorities to immediately investigate police use of force in their recent crackdown on protesters. Her spokesman said there was "credible evidence" to suggest that Hong Kong law enforcement officials had used less-than-lethal force in ways that are "prohibited by international norms and standards."

Chris Patten, the last British governor of colonial Hong Kong before the city's return to Chinese sovereignty in 1997, warned that a Chinese intervention would be a "catastrophe" for both Hong Kong and China.

Speaking to BBC radio, he urged Lam and Xi to find a way to bring people together.

"There is a degree of frustration and anger at the government refusing to give any sensible ground at all, which probably provokes more violence," Patten said.

(Except for the headline, this story has not been edited by NDTV staff and is published from a syndicated feed.)
Comments
Hong KongHong Kong airportHong Kong protests