Homosexuality Still A Crime In Kenya As Court Delays Ruling

The delay was met with dismay by Kenya's LGBT community and their allies, who have been anxiously awaiting a ruling on the petition, which was filed three years ago. 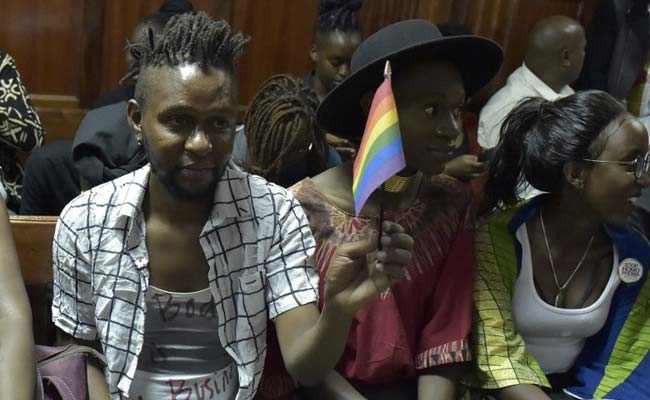 An LGBT activist holds a rainbow flag as he attends a court hearing in Nairobi. (AFP)

Kenya's High Court on Friday postponed a much-anticipated ruling on whether to scrap colonial-era laws which criminalise homosexuality, citing a heavy case load.

The delay was met with dismay by Kenya's LGBT community and their allies, who have been anxiously awaiting a ruling on the petition, which was filed three years ago.

"The files are above my height... we are still working," said Chacha Mwita, one of the judges, who added that one of his colleagues was on leave and that the three-judge bench were juggling multiple cases.

He set the decision for May 24.

"We plan to meet in April if all goes well and see whether we can come up with a decision. You do not appreciate what the judges are going through."

Gay rights organisations are asking the court to scrap two sections of the penal code that criminalise homosexuality.

One section states that anyone who has "carnal knowledge... against the order of nature" can be imprisoned for 14 years. Another provides for a five-year jail term for "indecent practices between males".

On social media Kenya's LGBT community and allies have been anxiously counting down the hours to the ruling.

"To say we are disappointed would be an understatement," the National Gay and Lesbian Human Rights Council (NGLHRC), one of the petitioners, wrote on Twitter.

Activists believe Kenya has a chance to blaze a trail in Africa where homophobia is virulent in many communities, with similar laws in over half the countries on the continent.

While convictions under the decades-old laws are rare, gay activists say the legislation is unconstitutional and fuels homophobic persecution.

Imani Kimiri of the NGLHRC's legal team, told AFP her office dealt with 15 prosecutions under the laws in 2018, but cannot recall the last conviction -- slamming the process as "just a frustrating endeavour".

The petitioners argue that under Kenya's 2010 constitution every person is said to be equal before the law -- a protection directly contradicted by the disputed sections of the penal code.

Those who are blackmailed, evicted, fired, expelled from school, or assaulted over their sexual orientation, are unable to access justice because it means "confessing to a crime", said Eric Gitari of the NGLHRC.

Activists were optimistic of a ruling in their favour, given recent decisions by the court.

And in September, a court ruled that "Rafiki" (friend), a film about a lesbian love affair which was the first Kenyan movie to be shown at the Cannes film festival, could be screened domestically for seven days after its initial banning.