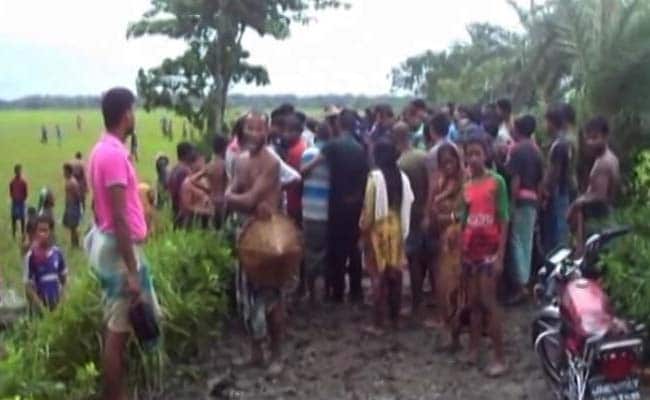 People assembled at the site of the attack on the Hindu worker which is the latest in a series of such attacks on religious minorities in Bangladesh.

Dhaka: A 62-year-old Hindu monastery worker was hacked to death in Bangladesh today, police said, the latest in a series of such attacks on religious minorities in the mainly Muslim country.

The latest murder came as Bangladeshi police announced a special week-long crackdown on militants as they ramp up efforts to stem the killings, with five members of a banned Islamist outfit killed in gun battles with officers in the past three days.

Nityaranjan Pande was taking his regular early morning walk when unidentified attackers set upon him, killing him on the spot, police said.

"As a diabetic, everyday he walks early in the morning. Today as he was walking, several attackers hacked him in the neck... He died on the spot," local police station chief Abdullah Al-Hasan told AFP.

"He had been working at the monastery for around 40 years. In recent years he was the head of its office staff," he said.

But the head of police in the northwestern district of Pabna, where the Shri Shri Thakur Anukulchandra Ashram is located, said the killing bore the hallmarks of recent attacks by Islamist extremists on minorities and secular activists.

"There was no eye-witness to the attack as it happened very early in the morning," Alamgir Kabir told AFP.

Bangladesh is reeling from a wave of murders of secular and liberal activists and religious minorities that have left nearly 50 people dead in the last three years.

The murders have spiked in recent weeks with a gruesome wave of killings that has spanned from the capital Dhaka to remote parts of the north and coastal south.

In the past week alone, an elderly Hindu priest was found nearly decapitated in a rice field, a Christian grocer was hacked to death near a church while the wife of an anti-terrorism officer was stabbed and shot.

Her husband had led several high-profile operations against the banned Jamayetul Mujahideen Bangladesh (JMB), an Islamist militant group, in the southeastern city of Chittagong.

Prime Minister Sheikh Hasina's government has however blamed homegrown Islamists for the attacks, rejecting claims of responsibility from the international jihadist groups.

The JMB is one of the main domestic militant outfits in the frame for the murders, with police shooting dead five members of the group since Tuesday.

Shahidul Hoque, inspector general of police, vowed in an address to a meeting of top police officials in Dhaka Thursday that those involved in the killing of the police officer's wife would be "brought to justice very soon".

Experts say a government crackdown on opponents, including a ban on Bangladesh's largest Islamist party Jamaat-e-Islami following a protracted political crisis, has pushed many towards extremism.

Victims of the attacks by suspected Islamists have included secular bloggers, gay rights activists and followers of minority religions.

A Hindu shop owner was hacked to death outside his store in a northern district late last month, while a Hindu tailor was killed in April after allegedly making derogatory remarks about the Prophet Mohammed.

ISIS claimed responsibility for both those killings.