In a tweet, Trump's son, Donald Jr., mocked Clinton's cameo at the Grammys as a "great consolation prize" after losing the presidential race. 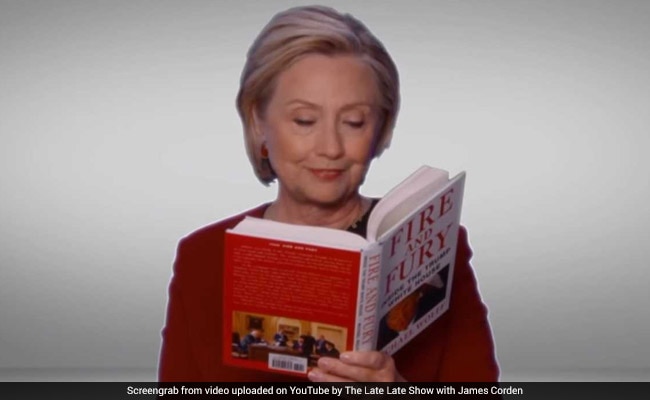 In the skit, Hillary Clinton auditioned to narrate "Fire & Fury," a book on President Donald Trump.

About two and a half hours into the Grammy Awards on Sunday night, the show was mostly politics-free - but that changed in a big way, as several music stars and Hillary Clinton joined in a prerecorded skit that mocked President Donald Trump.

"Some people don't know this, but you don't always need to be a musician to win a Grammy. In fact, every year, the Recording Academy has honored the best spoken word album," host James Corden informed viewers. "Over the years, the award has gone to some of the world's most inspiring voices. Bill Clinton has won a Grammy. Barack Obama has won a Grammy. Hillary Clinton, Jimmy Carter, Al Gore - they all have Grammys.

"We know that our current president does love winning awards, and the good news for him is he may just be the subject of next year's winner," Corden continued. "The question I've got is: Who will be the narrator?"

Cut to: A fake audition for the spoken word version of "Fire and Fury," an explosive book by Michael Wolff that described chaos in the White House and reportedly infuriated Trump.

John Legend kicked things off by reading an excerpt. "Trump won't read anything. He gets up halfway through meetings with world leaders because he is bored"

Next in line: Cher. "His comb-over; the color was a product called Just for Men. The longer it was left on, the darker it got," she read.

Snoop Dogg took his turn: "Trump did not enjoy his own inauguration. He started to get angry and hurt that stars were determined to embarrass him." Snoop Dogg paused and looked up. "I definitely wasn't there."

Rapper Cardi B read the part about Trump eating cheeseburgers in bed and was astonished. ("Why am I even reading this (expletive)? I can't believe that he really - this is how he lives his life?") DJ Khaled got the line about Trump criticizing the housekeeping staff for picking his shirt off the floor.

Then there was one more auditioner.

"He had a longtime fear of being poisoned," a voice intoned behind a raised book, before the cover was quickly lowered to reveal it was Hillary Clinton. The Grammy audience cheered loudly at the surprise. "One reason why he likes to eat at McDonald's. Nobody knew he was coming and the food was safely pre-made."

"You think so?!" Clinton asked.

"The Grammy is in the bag?" she said.

"In the bag," Corden assured her.

End of sketch. Corden smiled on stage as the audience applauded. "That might have been the biggest cheer of the night," he said.

However, not everyone was amused.

In a tweet, Trump's son, Donald Jr., mocked Clinton's cameo at the Grammys as a "great consolation prize" after losing the presidential race.

Nikki Haley, the U.S. ambassador to the United Nations, offered another jab.

Promoted
Listen to the latest songs, only on JioSaavn.com
"I have always loved the Grammys but to have artists read the Fire and Fury book killed it. Don't ruin great music with trash," she tweeted, adding that it "ruined" the show. "Some of us love music without the politics thrown in it."