Hikers Stumble Upon Mysterious Monolith, This Time In The Netherlands

Hikers found the object on Sunday on private land near the Kiekenberg nature reserve in northern Friesland province, a spokesman for the Dutch Forestry Commission said. 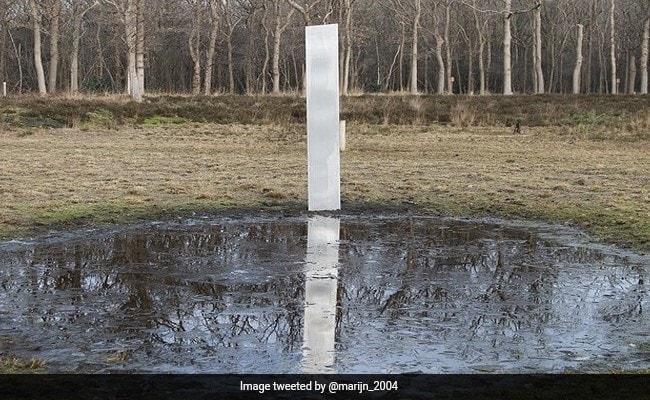 A mysterious metal monolith has appeared on a heath in the Netherlands after similar objects were found in the United States, Romania and Britain, an official said.

Hikers found the object on Sunday on private land near the Kiekenberg nature reserve in northern Friesland province, a spokesman for the Dutch Forestry Commission said.

"We know that it was probably placed this weekend because some hikers who were walking there found it, but we don't know it got there," forestry commission spokesman Imke Boerma told AFP.

Rangers went to check out the object on Monday morning and were still hunting for clues to its provenance.

A similar-looking structure appeared briefly in the Utah desert late last month, then two others cropped up in southern California and Romania days later. Another appeared on a beach on the Isle of Wight off the south coast of England on Sunday.

Photos in Dutch media showed the object in Friesland with a dull silver-coloured surface, standing next to a marshy pool on frosty ground.

Local broadcaster Omrop Fryslan said the Dutch object was not shiny like the other monoliths although it was a similar size and shape.

"I walked up to it, but there was nothing to be seen around the monolith. Just as if it was placed from above," hiker Thijs de Jong, the first person to find the obelisk, told Omrop Fryslan, adding that it would "certainly have needed two or more people" to place it.

The broadcaster said there were suspicions the obelisk could be a stunt by a 'New Year's Eve club", a tradition in the north of the Netherlands to draw attention to a village or association.

But it quoted de Jong as saying that there was no such club in the area. "I myself am thinking more of a kind of artist collective that does something like that," he said.

The appearance of the Utah object in late November sparked wild rumours of alien visitations due to a resemblance to the black monolith in the Stanley Kubrick science-fiction film 2001: A Space Odyssey.

An anonymous art collective has taken credit for the Utah installation but no one has claimed responsibility for those in Romania, the Isle of Wight and the Netherlands.