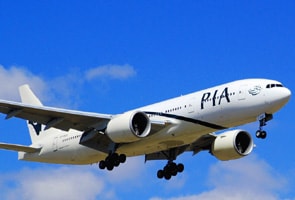 Karachi: A Pakistan International Airlines flight today made an emergency landing at the Karachi airport after a passenger allegedly threatened to hijack the aircraft.

PIA flight PK-586, which was flying from Karachi to Bahawalpur in Punjab province, turned back to the port city after an air hostess alerted the captain about the passenger's threat, TV news channels reported.

The passenger who made the alleged threat was arrested by commandos of the Airport Security Force at the Jinnah International Airport.

The aircraft was searched by security forces after being evacuated.

Following his arrest, the passenger claimed he had made the alleged threat after a quarrel with the air hostess and that he had no intention of hijacking the aircraft.

The number of passengers on the flight could not immediately be ascertained.

Pakistan's aviation industry has been hit by a string of problems in recent years.

A total of 127 people were killed when a Boeing 737 of the private Bhoja Air crashed near Islamabad on April 20.

Promoted
Listen to the latest songs, only on JioSaavn.com
This was the second major air disaster in the vicinity of the Pakistani capital since July 28, 2010, when an Air Blue airliner slammed into the Margalla Hills in cloudy weather, killing all 152 people on board.

State-run PIA, which is the country's largest airline, is grappling with a funds crunch and an ageing fleet.
Comments
Pakistan flighthijack attempt