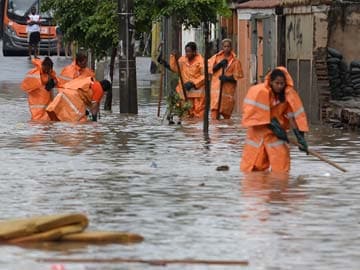 Firefighters said two bodies were found in a river on the poor northern outskirts of Rio.

The federal government said it would send in police to counter some looting that was reported, and the Rio state government asked for assistance in providing water, food and cots for some 2,000 families that were driven from their homes by flooding.

Some people took to the streets in jet skis to rescue neighbors from homes surrounded by water. Commuters were seen standing atop buses as water rose to the windows. Sirens warning citizens to be alert for mudslides rang in more than 40 poorer neighborhoods.

Promoted
Listen to the latest songs, only on JioSaavn.com
Mayor Eduardo Paes asked people to stay indoors and avoid the streets.

Officials said one western Rio neighborhood received 2.5 inches (63 millimeters) of rain in just one hour early Wednesday. Other areas saw nearly 5 inches (124 millimeters) fall since midnight. Rains lessened by early afternoon, but a steady drizzle still fell over most of the city.