Health Secretary Alex Azar is in Taipei for a three-day visit to promote shared democratic values and the island's success in taming the coronavirus. 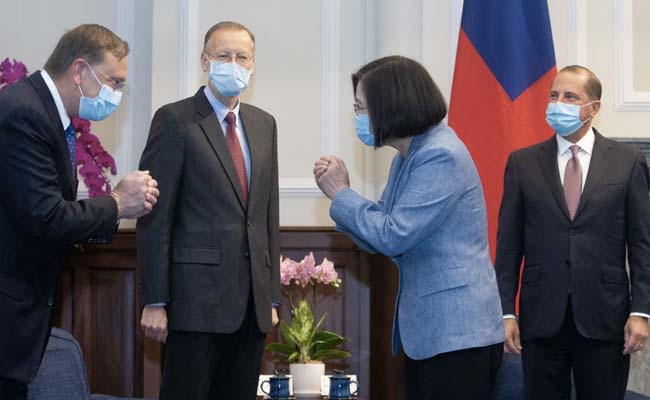 China has described Alex Azar's visit as a threat to "peace and stability".

A US cabinet member met Taiwan's leader Monday during the highest level visit from the United States since it switched diplomatic recognition from the island to China in 1979, a trip that Beijing has condemned.

Health Secretary Alex Azar is in Taipei for a three-day visit to promote shared democratic values and the island's success in taming the coronavirus.

His trip comes as relations between the United States and China are in tumult, with the two sides clashing over a wide range of trade, military and security issues, as well as the pandemic.

China, which insists Taiwan is its own territory and vows to one day reclaim it, has described Azar's visit as a threat to "peace and stability".

On Monday morning, Azar met President Tsai Ing-wen, who advocates the island being recognised as a sovereign nation and is loathed by China's leaders.

"Taiwan's response to COVID-19 has been among the most successful in the world, and that is a tribute to the open, transparent, democratic nature of Taiwan's society and culture," Azar told Tsai.

Tsai thanked the US for supporting its bid to be part of the World Health Organization (WHO), a body Beijing keeps the island frozen out of.

Azar brushed off China's criticism when asked about Beijing's anger over his visit.

"The message that I bring from the US government is one of reaffirming the deep partnership the United States has with Taiwan in terms of security, commerce, health care and shared common values of democracy, economic freedom and liberty," he told reporters before his meeting with Tsai.

Azar has previously been critical of Beijing's response to the coronavirus, which began in central China, as well as the WHO.

It was a theme he repeated on Monday.

"(Taiwan) knew very early on... to not trust some of the assertions coming out of there (Beijing) or validation from the World Health Organization," he said.

As well as meeting Tsai, Azar will hold talks with his counterpart Chen Shih-chung and Foreign Minister Joseph Wu.

Taiwan has become a poster child for defeating the coronavirus thanks to a well-honed track and tracing programme as well as firm border controls.

Despite its proximity and economic links to China it has recorded fewer than 500 infections and seven deaths.

In contrast the US has recorded the most deaths in the world with more than 160,000 fatalities.

Critics have accused US President Donald Trump of ramping up criticism of China as a way to divert from growing public anger over his administration's coronavirus response, especially as he fights for re-election in November.

Washington remains the leading arms supplier to Taiwan but has historically been cautious in holding official contacts with it.

Throughout the 1990s the United States sent trade officials to Taiwan with regularity.

The difference this time, he said, is the context, with Azar travelling at a time when relations between Washington and Beijing have hit a new low.

"Sending him to Taiwan shows respect for the old framework while putting a finger in China's eye at the same time," Paal said.

"The fact that they didn't choose to send a national security advisor or someone else suggests they are trying to come as close as possible to China's red line but don't want to cross it."

The last cabinet minister to visit Taiwan was in 2014 when the then head of the Environmental Protection Agency led a delegation.

But Washington has billed Azar's visit as the highest level trip made by a senior administration official since the diplomatic switch.