He Was Unrecognisable After Crash, "Called" Dead. Back Home After 60 Days

Newspaper articles paying tribute the hockey team said so. And, at an emotional memorial vigil in the small Saskatchewan town of Humboldt soon after the crash, Xavier LaBelle was listed among the dead. 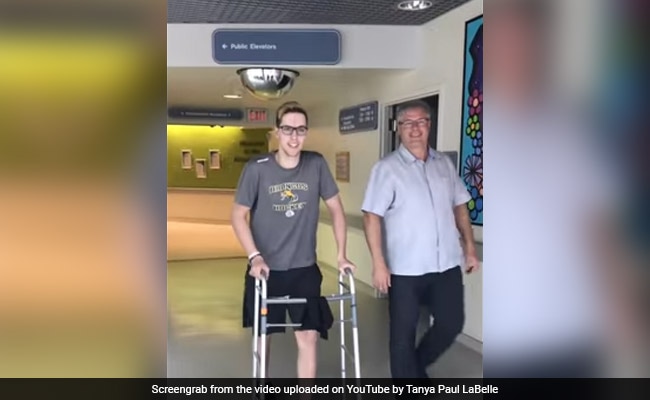 Two months after the crash, Xavier LaBelle walked out of the hospital, officially discharged

On that tragic April afternoon when the Humboldt Broncos's team bus collided with a tractor-trailer, everyone said Xavier LaBelle was among the 16 people killed.

The coroner said so. Newspaper articles paying tribute the hockey team said so. And, at an emotional memorial vigil in the small Saskatchewan town of Humboldt soon after the crash, LaBelle was listed among the dead.

But it all been a terrible mistake. The badly injured LaBelle was in the hospital, surrounded by the family of his teammate, Parker Tobin, who felt fortunate their son had lived, even if his injuries made him unrecognizable.

Then LaBelle woke up and said, "I'm not Parker Tobin," a coroner recently recalled.

LaBelle had lived. Tobin had died. It was a mix-up that made headlines around the world and compounded an already overwhelming tragedy.

On Wednesday, exactly two months after the crash, LaBelle walked out of the hospital, officially discharged but not fully recovered. In a statement, he described his initial injuries: "a fractured skull, a concussion, internal bleeding, and several other internal injuries, and approximately twenty broken bones, including thirteen in my spine, one of which required surgery."

Early on in the video, he lies prone in a hospital bed. A gruesome scar runs down the center of his forehead. His neck is encased in a brace. A breathing tube pokes out of his mouth. Later, there are images of him being spoon-fed.

"In the early stages of my recovery I needed help to sit up - help to do all those things we take for granted, like eating and brushing my teeth," LaBelle said in his statement. "It was awful, but today I am able to walk and look forward to eventually running and skating."

LaBelle said his injuries left him without any memories of the crash or the two weeks after. Learning about what had happened was "shocking and heartbreaking," he said.

"It was a privilege and an honour to get to know so many incredible people," he said, listing the names of those who died. "I miss you all."

The long list of people he thanked included his family, medical team and well-wishers. "You all gave me the strength and courage that I needed to start healing and feeling better," he said.

LaBelle has now set his sights on another goal: graduating from high school at the end of the month. During his hospital stay, LaBelle's teachers tutored him, helping him complete his last three classes.

As he left the hospital, LaBelle was wearing a golden yellow long-sleeve shirt with the Broncos logo on the front. Emblazoned across his chest was one word: "Believe."

The team had worn the shirts at the beginning of last season's playoffs, LaBelle said.

Promoted
Listen to the latest songs, only on JioSaavn.com
"We believed in each other," he said. "I believe people will never forget what happened to us. I believe we will get through this together."