The final phase of the evacuation in Hawaii was carried out late on Friday and early Saturday by fire and police department personnel. 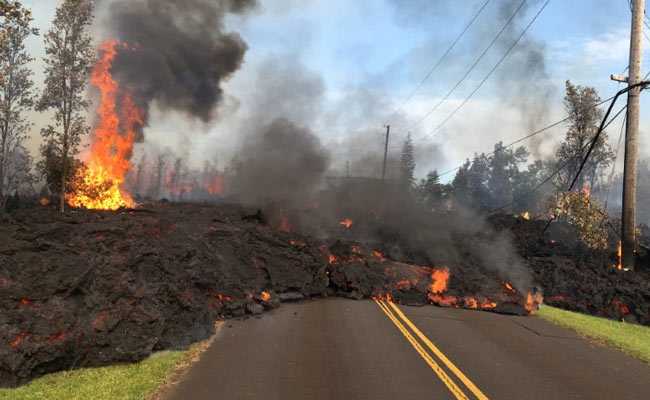 Lava advances along a street near a fissure in Hawaii (Reuters)

Pahoa, Hawaii: National Guard troops, police and firefighters ushered the last group of evacuees from homes on the eastern tip of Hawaii's Big Island early on Saturday, hours before lava from the Kilauea volcano cut off road access to the area, officials said.

A stream of lava as wide as three football fields flowed over a highway near a junction at Kapoho, a seaside community of rebuilt after a destructive eruption of Kilauea in 1960.

The lava flow left Kapoho and the adjacent development of Vacationland cut off from the rest of the island by road, according to the Hawaii County Civil Defense agency.

Also, lava destroyed a freshwater lake, boiling away all of the water in it, the Hawaiian Volcano Observatory reported late Saturday, local time.

Authorities since Wednesday had been urging residents of the area to leave before lava spewing from a volcanic fissure at the eastern foot of Kilauea reached the area.

The final phase of the evacuation was carried out late on Friday and early Saturday by fire and police department personnel, with help from the Hawaii National Guard and public works teams, county civil defense spokeswoman Janet Snyder told Reuters by email.

An estimated 500 people live in the Kapoho area, but Snyder said it was not immediately clear how many residents, if any, chose to stay behind.

Another 2,000 people have already been evacuated from Leilani Estates, an area further west where dozens of homes have been devoured or cut off by rivers of lava streaming over the landscape since May 3.

For those whose homes have been unscathed, the prolonged strain of uncertainty has grown increasingly difficult.

"We're waiting for Pele to make the decision," said Steve Kirkpatrick, a retired mailman and 14-year resident of Leilani Estates, referring to the volcano goddess of Hawaiian myth.

His home was still intact but in harm's way.

"You go for three weeks and you think everything is fine, and then you can still lose your house," Kirkpatrick told Reuters as he and his wife, Kathy, ventured back to their community to help friends move out.

"As the lava expands, so has the anxiety," she said, the low, jet-like sound of lava spouting from the ground audible in the distance.

Lava was not the only challenge posed by the eruption.

One resident, Nancy Avery, said the glass strands hurt like paper cuts, slicing into her fingers and feet, toes exposed because she wore only sandals. She tried to pick up a strand but, "It just kind of melted into my skin and cut me. It's so sharp, it feels like the glass is still in there."

The lava itself, extruded from about two dozen fissures that opened on the slope of Kilauea's "eastern rift zone" earlier this month, has also knocked out telephone and power lines and forced the shutdown of a geothermal energy plant.

Lava burned two buildings at the plant, a substation and a warehouse that stored a drilling rig, officials said.

The latest upheaval of Kilauea, one of the world's most active volcanoes, comes on the heels of an eruption cycle that began in 1983 and continued almost nonstop for 35 years, destroying more than 200 dwellings and other structures.

The current activity has been accompanied for weeks by daily explosions of gas and volcanic rock from Kilauea's summit crater as well as earthquakes.

But the summit has quieted down over the past few days, as tons of rubble shaken loose from the interior walls of the crater have fallen into the void and plugged up the bottom of the vent.

Promoted
Listen to the latest songs, only on JioSaavn.com
Scientists are unsure whether the blockage will eventually end eruptions at the summit or lead to a buildup of pressure that could cause a much bigger explosion.
© Thomson Reuters 2018