Gunmen Kidnap More Than 40 From School In Central Nigeria 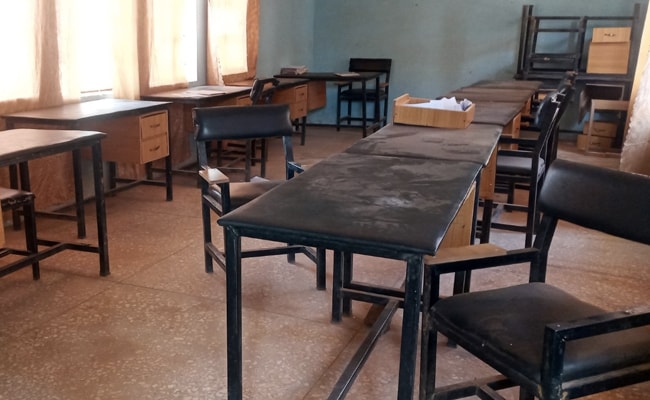 Muhammad Sani Idris said 650 students had been in the school when it was attacked. (Representational)

Gunmen believed to members of a criminal gang attacked a school in central Nigeria, killing one student and kidnapping dozens of other pupils, teachers and relatives, a government official said Wednesday.

Forty-two people were seized when gunmen dressed in military uniforms raided the Government Science College (GSC) in the town of Kagara in Niger state before hauling the kidnap victims into a nearby forest.

The new tally came after initial reports from a government official and a security source that hundreds of students were snatched from the school, where they were staying in dormitories.

"They kidnapped 42 people from the school. They took away 27 students, along with three teachers. One student was killed. They also kidnapped 12 family members of the teachers," Muhammad Sani Idris, spokesman for Niger state's government, told AFP by phone.

He said 650 students had been in the school when it was attacked late Tuesday.

Heavily-armed gangs known locally as "bandits" in northwest and central Nigeria have stepped up attacks in recent years, kidnapping for ransom, raping and pillaging.

President Buhari, 78, condemned the abduction and ordered security forces to coordinate an operation to rescue the students.

"The President has directed the Armed Forces and Police, to ensure immediate and safe return of all the captives," presidential spokesman Garba Shehu said in a statement without giving details on the number of missing.

Only two months ago, more than 300 students were kidnapped from a school in Kankara, in nearby Katsina state.

The boys were later released after negotiations with government officials, but the incident sparked global outrage.

Kidnap gangs in Nigeria's northwest and central states are just one challenge in Africa's most populous country where security forces face jihadists in the northeast, ethnic clashes and piracy in the south.

The government official had said some students escaped and a security source said earlier a headcount had been underway to confirm how many students were abducted.

Troops with air support were tracking the bandits for a possible rescue operation, the source said.

The region is increasingly a hub for criminal gangs who raid villages, killing and abducting residents after looting and torching homes.

Bandits are known to hide in camps in Rugu forest, which straddles Zamfara, Katsina, Kaduna and Niger states. Despite the deployment of troops, deadly attacks persist.

The gangs are largely driven by financial motives and have no known ideological leanings.

But there is growing concern they are being infiltrated by jihadists from the northeast who are waging a decade-old insurgency to establish an Islamic state.

The latest kidnapping incident comes nearly three years after 111 schoolgirls were snatched by jihadists in Dapchi and six years after 276 girls were taken from Chibok in a raid that shocked the world.

"Nigeria has to declare a state of emergency on insecurity," said Idayat Hassan, director of the Abuja-based Centre for Democracy and Development think tank.

"The government must secure the schools and urgently too, or else (the) Chibok, Dapchi and Kankara school raids will encourage others to do worse."