The giant hailstones, described as being the size of mangoes or grapefruits, measured more than 16 centimetres (six inches) in diameter, and came down hard on a town in Australia. 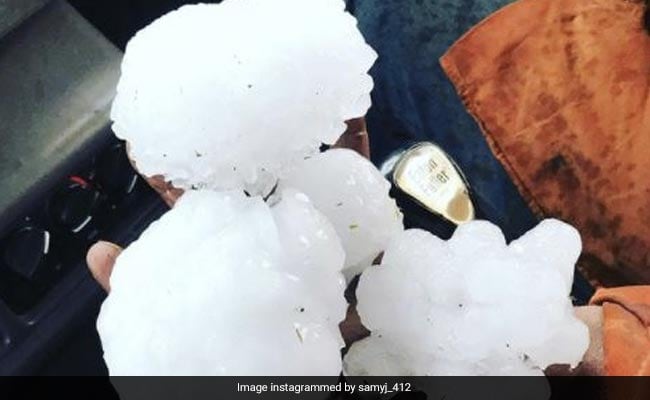 Social media images showed huge hailstones smashing down in front of a car in Queensland.

A tropical north Australian town has been pounded by "record-breaking" hailstones the size of mangoes or grapefruit, with some shattering car windscreens.

They hit Yalboroo when a storm swept through the small town about 1,000 kilometres (621 miles) north of Brisbane late Tuesday.

Social media images showed the icy monsters spilling out of people's hands, and huge hailstones were seen smashing down in front of a car in one video posted on Twitter.

Update: giant hailstones in excess of 16 centimetres have been observed in Yalboroo, north of Mackay in Central Queensland.

"Yesterday's 16 cm hail in Yalboroo, Queensland is a new Australian record," the Bureau of Meteorology tweeted.

"The atmosphere was extremely unstable, which allowed hail to continue growing before gravity forced it to the ground."

The previous record of 14 centimetres was set in southeast Queensland state in October 2020, the bureau added.

There were fresh warnings of severe thunderstorms along Australia's east coast on Wednesday, with reports of giant hailstones striking for a second day -- this time in the coastal town of Coffs Harbour, north of Sydney.