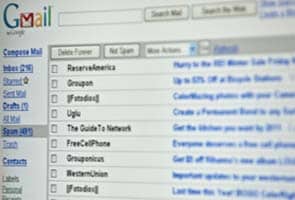 Google confirmed there was a "service disruption" beginning around 9:30 a.m. Pacific Time but did not specify how many users were affected, or where.

"We're investigating reports of an issue with Google Mail. We will provide more information shortly," Google said on the Google Apps Dashboard, a website that provides status updates for the company's various Web products.

Promoted
Listen to the latest songs, only on JioSaavn.com
Firmly entrenched in the consumer market, GMail is one of Google's most popular and important product offerings. The search giant has been pushing a corporate version of the email service to businesses as part of its Google Apps software suite, which competes with Microsoft Office.