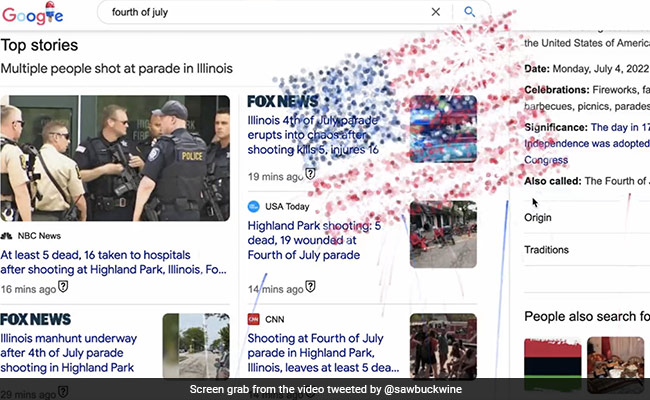 Google's special celebration page for the Fourth of July (America's Independence Day) angered many internet users, who complained of seeing fireworks amid the news of mass shooting in Chicago.

The special page was meant to show fireworks when users searched for July 4 related content. The tribute page had red, white and blue splashes along with the animation of fireworks.

But the celebrations appeared even after the page was filled with news of horrifying shooting in the Highland Park area of Chicago.

Internet users accused Google of being "tone deaf" for showing happy animations of fireworks over a layout of news showing updates about the mass shooting, in which six people were killed.

The Fourth of July is celebrated in the US because on this day in 1776, the Declaration of Independence was adopted by the Continental Congress.

A gunman on a rooftop opened fire on an Independence Day parade in Chicago, killing six of the participants and injuring 30 others. He also triggered scenes of total chaos as panicked onlookers ran for their lives, leaving behind a parade route strewn with chairs, abandoned balloons and personal belongings.

The police launched a massive manhunt after the incident and announced the arrest of 22-year-old Robert Crimo, identifying him as a "person of interest" in the case.

Emergency officials said around two dozen people, including children, were treated for gunshot injuries, with some in critical condition.

The shooting is part of a wave of gun violence plaguing the United States, where approximately 40,000 deaths a year are caused by firearms, according to the Gun Violence Archive website.